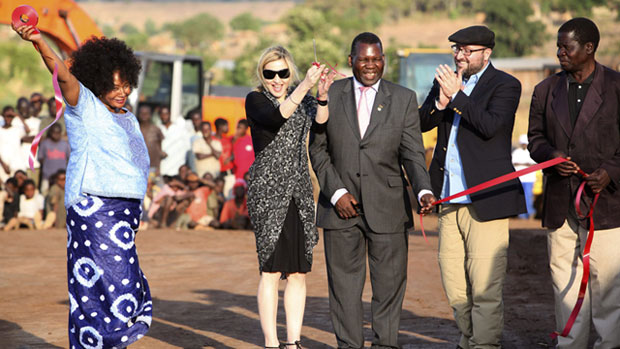 “Raising Malawi only built 10 classroom blocks and not schools. People should know the difference between the two.”

In December Madonna’s charity in tandem with global non-profit buildOn, announced the completion of 10 schools, claiming they would provide education to 4,871 children.

“I am overjoyed that my commitment along with buildOn’s to help educate the children of Malawi has come to fruition,” Madonna said in a statement issued at the time.

Malawi’s education minister said the country wanted to “clarify any misconceptions that may arise.”

It is not the first time the diva has had trouble with education projects in the country which is the native home of two of her adopted children.

In 2009, to great fanfare, she laid the foundation stone for a $15million (£9.4m) elite academy for girls in Chinkota village, not far from the national capital, Lilongwe. Madonna reportedly invested $11m of her own money in the project, which was also backed by the singer’s Kabbalah associates.

A year later, however, the school’s construction was cancelled and its local staff sacked, after a report accused them of “extreme mismanagement”.

A year later the school project was cancelled because of mismanagement by her Kabbalah associates and local employees sacked. Madonna has not explained how the money that was raised was spent.

Madonna’s charity also supports child care centres in the country where nearly one million children are orphaned by AIDS.