Acting president of Democratic Progressive Party (DPP) and brother to late president Bingu wa Mutharika has been charged with treason alongside nine others including incumbent Minister of Economic Planning and Development Goodall Gondwe.

Treason is a serious offence in Malawi that attracts a death penalty.

Besides treason, Mutharika has been charged with four other counts including inciting a mutiny, conspiracy to commit a felony, disobedience of statutory duty and giving false evidence to a commission of inquiry.

The case has been committed to the High Court where application for bail is set for hearing this morning.

After being formally charged, drama ensued at Lilongwe Magistrates’ Court when the suspects resisted being transferred to Maula Prison from Lumbadzi Police Station where they have been remanded since Monday.

The suspects were transferred by force to Maula even though the prosecution said there was no problem leaving them at Lumbadzi Police Station.

However, the suspects were moved from Maula to Lumbadzi again in the evening.

Mutharika and eight others appeared at Lilongwe Magistrates’ Court before Chief Resident Magistrate Ruth Chinangwa where they were formally charged.

DPP vice president Jean Kalirani and Gondwe did not appear in court as they are reportedly unwell.

However, Mwapasa was on Wednesday given police bail.

Former legal advisor to late president Mutharika, Allan Ntata, has been charged in absentia with two counts, one of treason and another of disobedience of statutory duty.

The charge of treason is contrary to Section 38 of the Penal Code which makes it an offence to endeavour or conspire to overthrow a lawfully constituted government by force or other unlawful means.

Mutharika, the seven cabinet ministers, Ntata, Mhura and Msaka have also been jointly charged on the sixth count of disobedience of statutory duty for denying that the then Vice President Joyce Banda had automatically become president.

Lead counsel for the State Ralph Mhone told the court that the accused persons would not take plea until a later date.

“Professor Peter Mutharika, Mr Bright Msaka and Mr Goodall Gondwe, you’re being charged with the second count of inciting a mutiny contrary to Section 41 of the Penal Code; that on 5th April at Kamuzu Central Hospital, you’re alleged to have jointly incited General Odillo to take over the country and to issue a statement announcing a takeover,” Magistrate Chinangwa read out the charges. Gondwe will also face charges of conspiracy to commit a felony and disobedience of statutory duty.

Mutharika surprised the court when he queried the sixth count of disobedience of statutory duty contrary to Section 123 of the Penal Code whose particulars indicated that he alongside Gondwe, Kalirani, Dausi, Nankhumwa, Kaliati, Mhura, Vuwa Kaunda, Mussa, Msaka and Ntata unlawfully disobeyed the Constitution by denying that the then vice president would automatically become president on the death of the incumbent.

Mutharika claimed the issue of succession was in the Constitution not Penal Code so he did not understand the charge.

After a 30 minute adjournment in which defence lawyers conferred on Mutharika’s argument, court resumed session after which the eight all told the magistrate they did not understand the charge.

The magistrate then committed the case to the High Court. 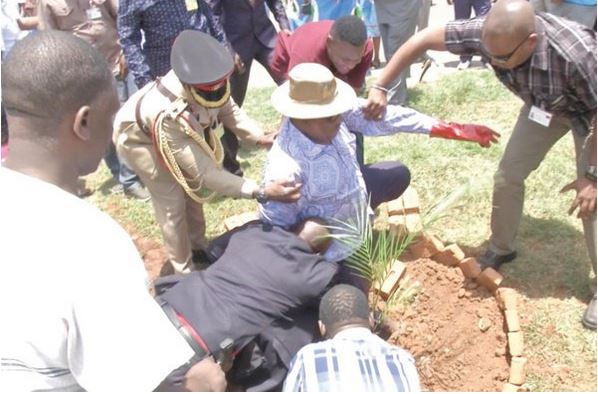