Investigators released pictures of two suspects in the Boston Marathon bombing on Thursday, seeking the public’s help in identifying two backpack-toting men photographed on the crowded sidewalk on Monday before bombs exploded near the finish line.

The blasts that killed three people and wounded 176 began a week of security scares that rattled the United States and evoked memories of the September 11, 2001 hijacked plane attacks.

“Somebody out there knows these individuals as friends, neighbors, co-workers or family members of the suspects,” Richard DesLauriers, the U.S. Federal Bureau of Investigation’s special agent in charge in Boston, told a news conference.

“Though it may be difficult, the nation is counting on those with information to come forward and provide it to us,” he said.

DesLauriers warned the public that the men were considered armed and dangerous.

Both men carried backpacks that were believed to contain the bombs. The FBI identified suspect No. 1 as a man wearing a dark baseball cap and sunglasses. Suspect No. 2 wore a white cap baseball cap backwards and was seen setting down his backpack on the ground, DesLauriers said.

The FBI released a 30-second video of the two men, one walking behind the other, that edited together three different angles. The video appeared to have been taken from security cameras. 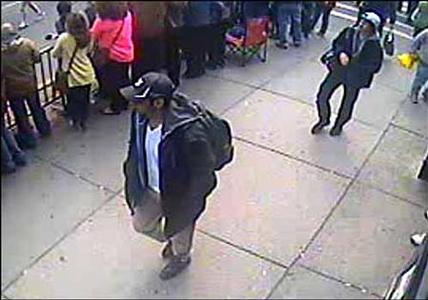 A picture of both men in the same frame was taken at 2:37 p.m., about 13 minutes before the two explosions tore through the crowd that had been cheering on finishers of the race.

Investigators believe the bombs were made of pressure cookers packed with shrapnel. Some of the wounded suffered gruesome injuries and at least 10 people lost limbs as a result of the blasts.

Investigators hoped the men would be identifiable within hours of the release of the pictures and video, a national security official said, speaking on condition of anonymity.

Investigators were looking at the men for some period of time before deciding to make the videos public, and they had extensive video and still pictures to justify the FBI decision to label the two men as suspects, the official said.

At least one other person of interest who featured in crime scene pictures had been ruled out as a suspect. Also ruled out earlier in the week was a Saudi student who was injured in the attacks, the official said.

President Barack Obama sought to bring solace to Boston and the nation in an interfaith service at a cathedral about a mile from the bomb site, declaring “You will run again” and vowing to catch whoever was responsible.

He promised resilience in a message directed toward Boston but also to a country that was on edge.

A man was arrested on Wednesday on suspicion of mailing the deadly poison ricin to Obama and a massive explosion at a fertilizer factory devastated a small Texas community, sending shockwaves at least 50 miles away.

Obama said the country stood in solidarity with the victims of the Boston bombs on their road to recovery.

After his speech, Obama met with volunteers and Boston Marathon organizers, many of whom cared for the injured, and with victims at Massachusetts General Hospital.

Before his visit, Obama declared a state of emergency in Massachusetts, making federal funding available to the state as it copes with the aftermath of the bombing.

To all those who don’t believe in ghosts and African juju,...

The Police in Zambia have confirmed of the robbery...