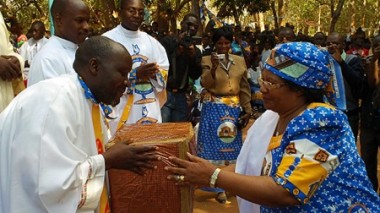 The Roman Catholic body called Centre for Social Concern (CFSC), which come up with monthly surveys of cost of living in Malawi has described the PP led government as “insensitive” for spending around US$4 million (MK1.6 billion) on a new fleet of 4 wheel drive Toyota Prado TX models for 35 cabinet ministers amidst painful economic reforms that are impacting on 65 percent of the 14 million people living below the poverty line .

The purchase of the vehicles also comes at a time when the poor southern African nation’s public hospitals have run out of essential medicines and many people are going hungry, not because of food shortages, but because of soaring food prices.

Minister of Finance Ken Lipenga  justified the purchase saying it is replacing the old fleet of Mercedes Benz cars which has been costly to maintain.

Critics argue the splurge on the vehicles is not in like with austerity measures.

“This is a blatant case of impunity, exemplifying misplaced priorities and a failure to empathize with millions of hungry Malawians,” CFSC said in a statement titled “Malawians deserve to have their right to food protected”.

The body said food governance is an increasingly important factor in ensuring national and household food security saying institutions’ or peoples’ decision charged with the noble responsibility of governing food affect the capacity of single households to ensure adequate supplies of food for their members.

“It is in this light that CfSC is shocked that at a time when vulnerable and poor mothers and girls are camping in ADMARC depots to buy rationed food, thousands of tonnes of maize has been wantonly rotting at the National Food Reserve Agency (NFRA).

“In view of the hunger situation in the country, CfSC considers this irresponsibility by NFRA as a gross violation of poor Malawian’s right to food and an act that calls for drastic redress measures. Food governance is not only how food is produced but also how it is stored, distributed, and consumed,” it said.

CfSC also observed that many households do not have the means to purchase their way out of any production failure, even for short periods saying the situation is even more critical now as the cost of living continues to soar.

The body said its food basket for the months of February and March shows that the price of staple maize has hit record levels with a kilogramme selling for up to K200.

Last month, fuel prices went up by an average of 2.2 percent, the second adjustment this year.

“This unprecedented price spike is subsequently driving hundreds of thousands of Malawi’s most vulnerable people further into the abyss of hunger and poverty. The consequence of this situation is that it is drastically reducing poor people’s choices in terms of meeting their basic needs, especially choices in the quality of food that they consume,” reads part of the statement.

The body also noted that shortages of cash in the face of the high cost of living also forces households to make uneconomic choices, such as selling productive assets or selling produce at low prices and then purchasing it back again later in the year at a high prices.

According to CfSC spot checks in Karonga, Lilongwe and Dedza, some farmers are already selling entire fields of un-harvested maize to traders at a giveaway price.

CfSC said it has been monitoring the price volatility of maize saying it is convinced that it is not a merely fleeting phenomenon.

“The food price peaks would not simply melt away without a deliberate and well thought intervention,” the body said.

It then called upon the Malawi government to enhance the distribution or utilization of the available maize by improving distribution systems to increase the supply of food saying this could bring down prices because food price volatility addresses itself as supplies expand.

“De-politicize food. Over the past decades, Malawi has grappled with a series of interrelated food crises that have unmasked the systemic flaws in food governance and highlighted government’s tendency to reward a small club of privileged economic actors and their political allies,” CfSC noted.

“Inadequate knowledge about food values and food choices, and intra-household distribution of food affect the way households benefit nutritionally from the available foods. The government ratified the national food and nutrition policy a year ago but implementation is slow due to lack of political will,” the statement said.