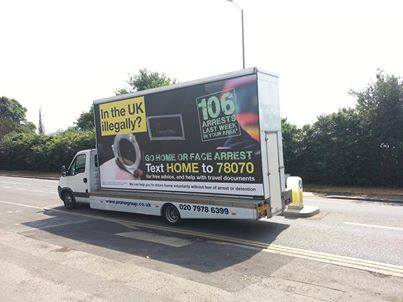 Why has the UK government started an advertising campaign telling illegal migrants to ‘go home or face arrest’?

The Home Office has launched a campaign targeting illegal immigrants in which vans will be driven round London with the slogan “In the UK illegally? Go home or face arrest”. The vans will also display a text number that migrants can message to arrange their return, as well as showing residents how many illegal migrants have been arrested in their area. Paul Wylie immigration enforcement in London for the Home Office told the BBC

“We are stepping up the arrest work but we’re also saying that’s not our preference. We actually want people to volunteer to go home. It’s in our interest because it costs considerably less for UK taxpayers, but hopefully it’s also in the individual’s interests…because it’s a better way to return home – more dignity for the individual.”

Previous article
”YES I WILL CONTEST IN THE 2014 POLLS” – KASAMBARA.
Next article
2 pigeons per family