August 14, 2013
A 7-year-old girl has been raped in the restroom of a running train in India’s central state of Chhattisgarh, police officials have said.

Railway police superintendent K.C. Agrawal said on Tuesday that the Indian girl was lured away from her family by a man in a park in Raipur city on Friday.

Police suspect that the man has taken the girl to a train and sexually assaulted her in the restroom sometime between Friday night and Saturday morning.

Agrawal said that the 40-year-old man was apparently the friend of the girl’s family.

The victim was left at the train station on Saturday morning. She was admitted to a hospital for treatment.

The attacker remains at large, with police teams reportedly fanning out to capture him.

The incident is the latest in a string of rape crimes that sparked nationwide outrage and protests in thecountry.

On April 25, Indian police said the dead body of a six-year-old girl was found in an under-construction building in Ranchi district of the eastern state of Jharkhand. The child was subjected to torture and rape.

On April 15, a five-year-old girl was abducted by her neighbor in New Delhi. She was held in a room for 48 hours and was raped several times before a passerby heard her moaning and rescued her.

On December 16, 2012, a 23-year-old Indian woman was gang-raped and savagely beaten on a moving bus and thrown out on to the street in New Delhi. She succumbed to her injuries in a hospital in Singapore on December 29. 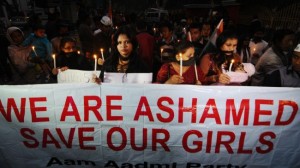