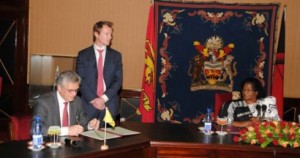 1997: Received the Africa Prize for Leadership for the Sustainable End of Hunger

1997: Sculpted for the Hall of Fame in recognition for championing women and children’s rights

1998: Received the International award for entrepreneurship development from the Africa Federation of Woman Entrepreneurs and Economic Commission for Africa

2001: Awarded Certificate of Honors by the Federation of World Peace and Love, Taiwan, Republic of China

2004: Re-elected as member of Muluzi’s Party

2004-2006: Served as Minister of Gender, Child Welfare and Community Services

2006: Received the International Award for the Health and Dignity of Women for her dedication to the rights of the women of Malawi

2006-2009: Served as Minister of Foreign Affairs and International Cooperation

2009: Received Award of Recognition from the Black Mayors Caucus

2009: Received the Lifetime achiever Award by the Rehoboth Trust

2010: Became a member of the Global Leaders Council for Reproductive Health

2010: Named Nyasa Times Multimedia ‘Person of the Year
’
2010: Received the Woman of Substance Award from the African Women Development Fund

2010: Started the Market Women in Development

2011: Founded and led the People’s Party

2011: Ranked 3rd in Forbes list of Most Powerful Women in Africa

2012: Became the fourth President of Malawi and the first female to hold the highest office

2012: Awarded the Legends Award for Leadership by the Greater African Methodist Episcopal Church

2012: Ranked 71st in Forbes list of Most powerful Women in the World

2012: Ranked 1st in Forbes list of Most powerful Women in Africa

2013: ranked 47th in Forbes list of most powerful women in the world

2013: Ranked 1st in Forbes list of Most powerful Women in Africa

Member of Parliament and Minister for Gender, Children’s Affairs and Community Services

Has a Cambridge School Certificate,

a Bachelor of Arts Degree in Early Childhood Education from Columbus University,

a Bachelor of Social Studies in Gender Studies from the Atlantic International University,

a Master of Arts Degree in Leadership at Royal Roads University

Designed the National Platform for Action on Orphans and Vulnerable Children