Supporters and sympathizers of former Minister of Justice, Ralph Kasambara, who was under police custody over the shooting of Paul Mphwiyo before being released on bail today by the Supreme court of Malawi have rushed to paint off the orange colors of the Peoples’ Partyy (PP) which suspended Kasambara as he was being held in custody.

The supporters have reportedly been irked by the manner win which the Joyce Banda regime and her PP have (man) handled Kasambara.

Below is an image of the members erasing off the orange painting in Kasambara’s constituency: 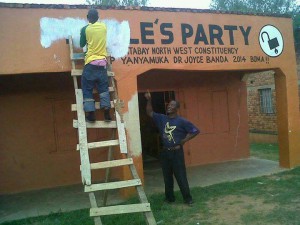