In the wake of the never ending investigations into the Capitol hill greatest corruption scandal aka The Cashgate Scandal, the United Democratic Front has issued a press release on the same. Below is the content unedited and unabridged:

The Cash Gate Crisis has tarnished Malawiās image. It has demonstrated that as a nation, we have failed to manage our public resources, especially those meant for ordinary Malawians who need them the most.

Malawi has shown that even after years of democratic transition, our political system is in fact regressing. What we have built appears to be a political system that continues to allow the privileged few, to consume state resources for their own private use while disregarding the voices of ordinary people.

This Crisis has had a knock on effect on investor opportunities and in turn, prospects for growth. It has eroded public trust and it has also resulted into disproportionate suffering of ordinary Malawians due to increased cost of living, fewer drugs in hospitals, unpaid civil servants, break down of social services and collapse of small scale businesses.

The fact that there is no clear strategy on the part of the Government, other than grand public relations efforts, attempting to demonstrate that it is managing this Crisis; is most worrying. It signals serious impunity and that those responsible would not be sanctioned.

Our assertion is that this Government continues to operate under a business as usual mode despite this being a grave issue for Malawi and Malawians. It suggests that it perceives this crisis as not exceptional. This is absolutely unacceptable.

It is surprising to suggest that the Government only understood the scale of the problem in the last few months.

First, any Government that assumes office starts off with a clear diagnostic of issues at hand.

Second, if corruption is a mere manifestation of a wider problem, then it means the Government failed to deliver on its fundamental objectives, which include:

2. Upgrading salaries to a living wage in the public service with effective performance management, including impartial recruitment and promotion systems based on merit;

So far Malawians do not have a clear understanding of what exactly the problem we are trying to address is. We argue that the break-down of IFMIS as a system is a mere symptom of the problem. We believe that the underlying problem goes beyond a few technocrats and senior civil servants. Cabinet, (as a collective), needs to hold itself accountable to all Malawians for this crisis.

Through ad hoc channels, we understand that the Government has developed an action plan to address this Crisis. This Plan has neither been tabled to Parliament nor discussed with our civil society groups/stakeholders including ordinary Malawians. It remains unclear as to who will be accountable for the implementation of this plan. It is unclear what the milestones in this Plan are and who is to objectively monitor and assess progress against the implementation of this plan. Furthermore, it remains unclear as to how Government will go about to systematically re-orient its spending priorities, in light of the current Crisis, and specifically through our national budget. Which areas will incur spending cuts, especially within the ERP and how does the Government intend to cushion ordinary Malawians from the effects of these spending cuts?

1. A clear articulation of the problem-and for leadership as a collective, at the most senior level (i.e. President and Cabinet) to take responsibility for addressing the Crisis.

2. A clear action plan, vetted by all Malawians, which the Government will implement and can be held accountable for, that addresses this Crisis-with both technocratic and political actions.

3. A revised budget that reflects expenditure cuts, savings as well as measures to cushion ordinary Malawians from effects of budgetary re-alignments, in light of a declining revenue base.

4. A clear outline of the consequences of this Crisis on the economic status of the country in the medium and long term; as this has implications on the new Government that will be ushered in power after May 2014. 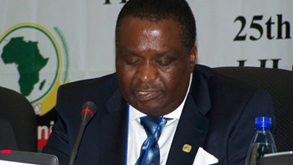 Malawi Arms Deal Not An Extension of Cashgate – Kandodo

RT @faceofmalawi: UDF press statement on the Cashgate crisis: In the wake of the never ending investigations into the Capitol hill… http:ā¦

Whatv about the billions your father stole?

Where is the money your father stole?