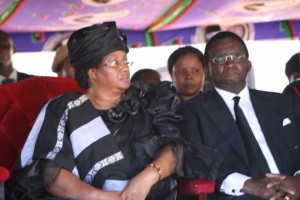 On Sunday May 18, 2014 just two days before Malawians went to polls, the Malawi director of information asked me what I thought Joyce Banda’s chances were to retain the presidency; after a few thoughtful seconds I answered that she would lose. A week later, my unfortunate prediction was confirmed, Joyce Banda had lost to her bitter rival Prof. Peter Mutharika.

In African politics, it’s hard for incumbents to lose an election given all the state resources at their disposal. While bookmakers believed the eleven-horse race would give Banda hot competition very few expected her to lose after just over two years in power. She was expected to stay around a bit longer as the second woman to become president of an African country after Liberia’s Ellen Johnson Sirleaf.

It was therefore a bolt-from-the-blue when Banda cried to the media that the vote had been rigged by the opposition compelling her to declare that, “I am nullifying the elections, using the powers invested in me by the Malawi constitution.”

With an embarrassing defeat ominous, that move was seen as a ‘face saving act’ or kicks of a dying horse and indeed, days later the country’s high court overruled her declaration paving way for Mutharika to be sworn in as Malawi’s fifth President after gaining a simple majority of 36.4% of the vote.

When I predicted that Banda would lose, Liberia’s deputy Minister of Information was seated next to me and he laughed off my aver; but I could understand his position because it’s common knowledge that his government was rooting for Banda’s victory.

My thinking was that having become a president by circumstance (Banda replaced President Bingu wa Mutharika after he died in office in April 2012) the election would be her chance to win legitimacy from the electorate and prove her political merit.

Unfortunately, Banda’s politics was hell bent on killing Bingu’s legacy even after the man was already dead. Whenever she got the chance Banda always heaped blame on Bingu’s reign for the country’s misfortunes which alienated most Malawians.

In 2013 while launching a Chinese funded road that cost $70million, she told those present that, “I signed the {2007} agreement as Foreign Minister that saw us switch to China as our diplomatic friend. By the way presidents do not sign such agreements but are required to be there as witnesses.” The statement sought to downplay the late President Bingu’s efforts in opening diplomatic ties with China to replace rivals, Taiwan after 41 years of diplomatic alliance.

“While Bingu was definitely no political angel, in Africa we respect the dead, we don’t talk ill of them, that was wrong politics,” noted Albert Jajja an expert in International communication.

It’s possible that Mutharika who’s a brother of the late President Bingu partly rode on this sympathy to beat Banda who applied Philosopher Machiavelli’s teachings and tried to destroy her rivals especially those from Mutharika’s camp. Sadly, she forgot Machiavelli’s advice that when you kick your enemy, kick them so hard that their efforts to kick back would be harmless. It appears that Banda’s kicks were weak and her rivals struck back with a knockout.

Banda’s other undoing lay in her decision to devalue the Kwacha and launch other austerity measures meant to stabilize the Malawi economy; these moves were applauded abroad but hated at home as they made life harder for urban Malawians. Bingu had resolutely refused to adopt the advice as a condition for western aid choosing to look east-China.

But it’s the yet to be resolved ‘Cash-gate’ scandal involving an estimated $15million of donor funds that could have buried Banda’s hope for a longer presidency after it left most of her cabinet members mired in corruption allegations. During her first months in power, Banda famously sold off the £8.4m presidential jet and fleet of 60 government Mercedes cars promising to be a different leader, but in January this year, it was discovered that she secretly continued using the jet a revelation that shattered her credibility and forced donors to cut off aid.

Many in Malawi believe Banda would have wished Lazarus Chakwera who came second in the election with 27.8% to be the next president but with a bitter rival now in charge and an unresolved corruption scandal still looming, Banda’s political woe’s could be far from over. She reluctantly sent out a congratulatory message to Mutharika but her failure to attend his inauguration was a clear sign that she was rejecting the President elect’s call for the losers to ‘join him in rebuilding the country.’

Can Banda mastermind a political riposte? It will be pretty tough.