Your Excellency, Professor Peter Mutharika. We leverage this unprecedented opportunity brought forth by the devastating floods in the country, to do Stocktaking of your political fortunes and leadership style.

It is the duty of ordinary citizens like ourselves, and many others, to hold your, and any other, public office to account and, most importantly, to constantly remind you the aspirations of the nation.

This is your 8th month in office. We can’t say it with certainty if Malawi must be grateful with your “dynamic leadership”. What has happened so far, confirms of one thing: The nation is in trouble! Perpetrated by leadership crisis.

Your leadership style is incredibly alien. Your long stay in America must have caused severe damage to the way you view Malawi, Malawians and their challenges.

The late former President Bingu (your very brother) was visionary in his own way. He had figured it out right that his young brother needed both extensive and intensive training, exposure and panel-beating of some kind if he were to take over from him one day. He, through his policy of Affirmative Action, gave you opportunities to learn.

It all happened in front of our flat nose. You came from nowhere through a backdoor into the centre stage of party politics.

You were appointed Legal Advisor. You were later appointed into his cabinet where you served in various portfolios namely; Education, Justice and Foreign Affairs. How did you perform? How did your brother’s government benefit apart from gaining your failure which was transmitted across its entire fabric?
Your Excellency, your contribution was simply a disaster. You were more than a liability. With you on his side, Pres. Bingu made strategic blunders.

Just to mention a few; he bought a Presidential Jet with donor money without Parliamentary approval. He took to the podium and told the Donor Community, World Bank and IMF, to go to hell. They did. He deported a British Envoy. A donor-dependent nation was abandoned. Things started falling apart with the center no longer holding. His ‘wings’ got apparently feathered off and clipped down to the ground. He could ‘fly’ no more.

Malawi, as a nation, is still paying for his arrogance-propelled blunders which were seasoned by incompetent pile of advisor yourself inclusive.

With you on his side, Bingu single-handedly constructed Shire-Zambezi Waterway without any consultation with his Mozambican counterpart who own the Zambezi part. The project was completed only to turn into White Elephant. Mozambique blocked the way. Billions of money down in the drain!

The only thing that came out of Shire-Zambezi project ‘alive’ was Ndata House with Marble Mausoleum he built for himself, in advance, while walking.

In party politics your Excellency, you were nothing but Crocodile Bile. Poisoned Chalice! The ruling party of your brother got divided. Split.

Joyce Banda, Harry Mkandawire and many reasonable compatriots were forced out. It all happened in your name so that you could succeed your brother upon the termination of his Constitutional term. Unfortunately, it ended sooner than he expected. He suddenl and sadly died literally in office amidst a series of meetings with his cabinet members party politburo. May his soul rest in peace on God’s will!

Your Excellency, you transported the dead body of the Head of State to South Africa in your cheap and callous delaying tactics as you crafted unconstitutional takeover of the government.
Not even a wild animal could have done what you did!

In case you have forgotten the Gossip Scandal: You were once inadvertently caught red-handed gossiping against a fellow senior party member in the name of Chimunthu Banda. Out of your mouth, you said Chimunthu Banda was from the north – therefore not the right person to succeed your brother. The scandal that rocked the nation.

You were speaking to your political aide when your phone rang. Thinking the Journalist had dropped the line, you continued with the Gossip. The scandal was broadcast live on radio stations.

Today, the party you so much brutalized others for, is all in your hands. You wanted to be President. You are the President today. Fortunately, we are not here to remind you that you are in office with a limping 32% tortured with rigging accusations.

In short, you are unelected government. Human Rights Commission, established by the Chapter of our Constitution, told you in no winking terms in December 2014 that your government lacks legitimacy. We are simply repeating that.

Today, we would like to tell you a blatant truth. Inspired by genuine confidence and utmost goodwill, we want to tell you what those closer to you are not telling you. Deafening noise is coming out of your party.
Once again, this time you are working hard to sideline your Vice President, Saulosi Chilima. Now that you have achieved State Power, you find Chilima no more useful. You have identified other ‘befitting’ candidates. The very blunder once committed by your big brother when he sidelined Joyce Banda. Perhaps itŌĆÖs your DNA thing.

Malwi is aware and is watching. The same old style of your brother. Using people when you need them and damping them when you find alternative help. Bad advice has a way to show itself. Your Excellency, your presidency is tattered. Suffocating to say the least.

It has no clue on a number of issues, let alone human senstivity and basic common sense. You can’t differentiate a Wedding Day and a moment of national grief.

When the country was pounded by deadly Flush Floods, you came out late to appreciate the level of devastation on the ground. It took you 7 days. After the water has shamed back to its course. When you did, you were immaculately dressed in suit and Tie and carried your Red Carpet under wraps.

You saw and felt nothing wrong in your humility and conscience to address flood victims while standing on Red Carpet with your iconic wife sitting in glamorous lime light. Despicable shame!

This letter Mr. President is NOT a love document. It must talk to you on serious terms. You are not in synch with the nation. You are displaying strange characteristics of spoilt brat child. Not commensurate to our societal values. Not progressive to our needs as a striving nation. Very repugnant!

Lies, indecisiveness, mediocrity and witch-hunting characterize your leadership style. Your State House boys are polluting the media with useless Press Releases devoid of tangible issues. Perhaps they are Twitter experts.

But to say the least, their useless Tweets in the misused name of Press Statements, really reflect badly on you your Excellency. It signifies your empty delivery.

Finally, this is our decisive statement Mr. President: You are literally out of touch with this nation’s aspirations.

We say this without winking! 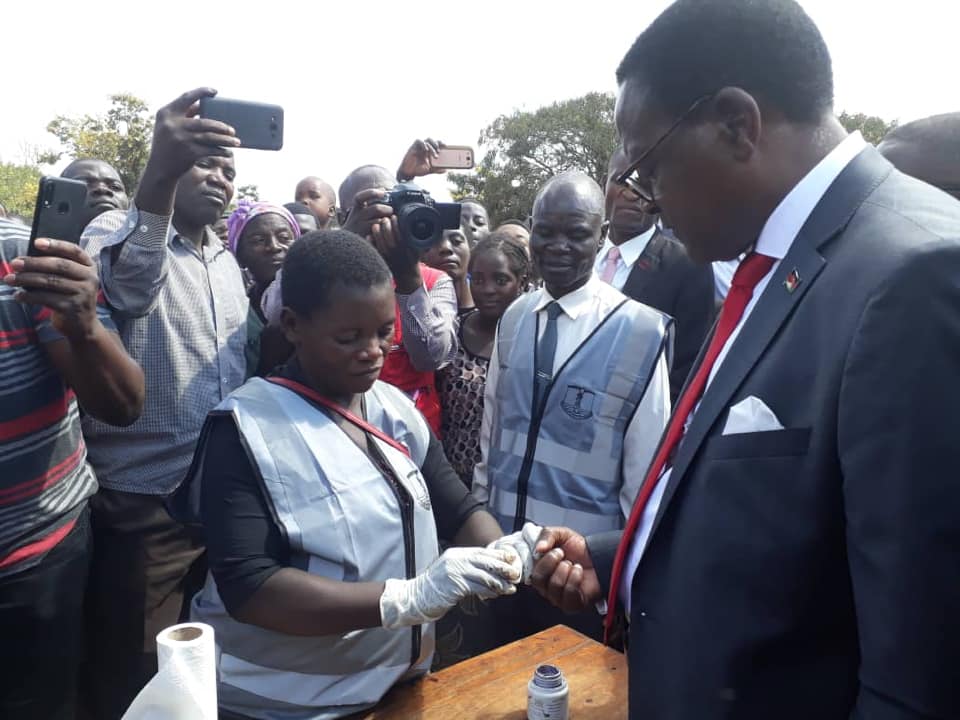 Chakwera on the driving seat in 35% votes counted

Man arrested for assaulting a step daughter in Nkhata Bay

I will wait until we vote you guys in 2019,cause you seem to be visionary leaders kkkkkkkk,mind you,a train is simple when driven by someone.