Consumer Association of Malawi (CAMA) Executive Director John Kapito has said consumers will benefit a lot from digital broadcasting because they will be watching quality pictures.

Kapito said this in Mzuzu on Tuesday night during the official switching from analogue to digital broadcasting which was presided over by Minister of Information, Tourism and Culture Kondwani Nankhumwa.

ŌĆ£When one purchases the Set-Top Box, they will pay once and once they install, there is no need to pay subscription fees; and they will enjoy quality pictures and broadcasting,ŌĆØ he said.

While applauding the government decision, Kapito urged the government to do more sensitization company on the digital migration, saying more people are not away of the development.

On his part, Nankhumwa said the whole world is migrating from analogue to digital terrestrial television broadcasting and Malawi cannot afford to be left behind.

ŌĆ£We cannot deny the people of Malawi their right to move with the rest of the world because we fear temporally challenges.

ŌĆ£Change is a sign of human progress and what is needed is to accept that change has come to be our new way of life and that digital television has come to stay,ŌĆØ Nankhumwa said.

He however admitted that there will be challenges as change comes with challenges.

ŌĆ£There is no perfect change in the world. Change often inconveniences us. Let us all switch our minds from analogue mindset to digital mindset as we are now a digital country,ŌĆØ Nankhumwa said.

The minister, therefore, announced that the Set-Top Box which is required for one to migrate to digital is now selling at K15, 000 effective Wednesday (June 17) in all Post Offices across the country.

The switch means people from Zomba and Mzuzu will now not be able to access TV channels using analogue. 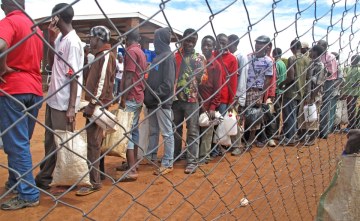