Despite President Professor Arthur Peter Mutharika turning down his 80 percent salary hike last year due to public outcry, information sourced by FaceofMalawi indicates that Mutharika’s annual salary is higher than that of the newly appointed President of Nigeria Muhammadu Buhari.

Mutharika earn MK1.5 million (2,935$) every month excluding other benefits that the sitting President enjoy. The development means Mutharika earns an estimated cash amounting to MK18 million (75,348$) annually which is more than Buhari of Nigeria.

According to a report published by Daily Monitor of July 23, 2015 titled “Salaries of Sitting African President,” indicates that Buhari who recently announced monthly salary cut by 50 percent, earn 70,000$ annually.

The report which has categorized salaries of African President according to their countries has seen the country’s President Mutharika being ranked 18th out of the 38 African leaders.

According to the report, the highest-paid leader, the research could find, is Paul Biya, whose $610,000 (Ksh61m) annual salary is almost three times that of South Africa’s Jacob Zuma, despite the South African economy being 10 times bigger than Cameroon’s. 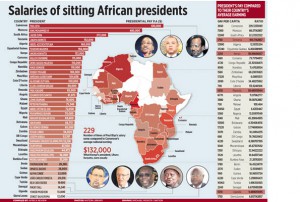 >Rather than simply rank the leaders based on absolute figures, The Africa Review decided to compare their gross annual salaries with the Gross National Income of their countries – basically comparing the leader’s pay with what their nationals, on average, earn.

Unsurprisingly, President Biya comes out on top again, earning 229 times what an average Cameroonian earns, followed by Liberia where President Ellen Johnson Sirleaf earns 113 times what her average citizen does.

Although Somalia’s President Hassan Sheikh Mohamoud makes the top 10 with his annual salary of $120,000 (Ksh12m), the country is excluded from the comparative study due to the lack of verifiable GNI per capita figures.

Overall, it appears that leaders of poor countries tend to pay themselves more than those in higher-income countries.