This park is 350 sq miles (900 sq km) in extent, south of Majete and 50 miles (80km) from Blantyre. The vegetation is thicket, with some deciduous woodland and denser tree growth along the stream courses. The eastern area is quite flat, allowing for a good and well-marked network of drive able tracks. To the west the level rises and low hills, outcrops of sandstone, break the skyline.

Lengwe is quite arid outside the rainy season and many of the water courses become dry sandy channels. This aids game viewing because it forces the animals to use the few pools that are permanent supplies of water. There are hides and man-made pools in the eastern area of the park just a short distance from the main gate. 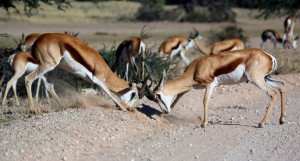 The advantages of the hides are that one may see a mix of wildlife together at the water-hole. Though there are predators in the park in the form of leopards and hyena, it is antelope which will be more often seen. These include what is rare for Malawi, the very beautiful nyala. Nowhere else in southern Africa is it seen so far North.

Magnificent kudu also roam the park as do common duiker, the small Livingstone’s suni, bushbuck and impala. Baboon, monkey, warthog, bushpig and buffalo are also seen in the park. The bird life of Lengwe is attractive with about 300 or so species recorded. These include some fairly rare birds, some seen nowhere else in Malawi.

At the gate of the park is a heritage centre – Tisunge! (This is the Chi Chewa for ‘Let us preserve!’) – Lower Shire Heritage Centre – boasting a small museum, arts & craft shop, a library, an education and manager’s office, an open plan meeting area and an ablution block. There are plans for a children’s club, a repository and a weaving area. For more details on the Centre and the cultural heritage of the Lower Shire Valley, see the Lower Shire Valley page.
The government tourist lodge was renovated and refurbished in 2003 and now operates as Nyala Lodge. Lengwe can also make a good one-day excursion from Blantyre.

Police in Kasungu are keeping in custody Cosam Phiri...