A Virginia based evangelical church the White Tail Chapel generated a lot of media attention and condemnation when they introduced a new phenomenon to their Christian worship last year by asking its congregation to serve the Lord the way God created them by worshiping in the nude.

The law was however not mandatory. In a shocking twist of event, One year on, the head pastor announced to his congregants Last Sunday that nudity is now mandatory in the church.

Based in Ivor in the southern state of Virginia, the church asks all its worshippers to cast off all their material concerns including clothing when they come to worship. White Tail describes itself as a family nudist community where visitors can enjoy all manner of activities, including spiritual worship, completely natural or nude.
Church Canteen
Justifying the church’s approach to faith, Pastor A 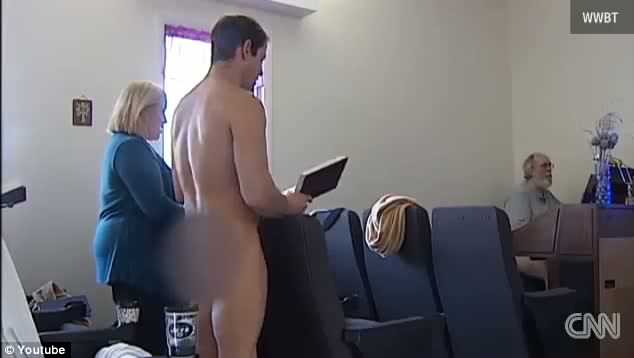 llen Parker said that many of Jesus’ most important moments happened while he was naked. Recently, the church even conducted a marriage in the nude with couple Katie and Robert Church taking their vows in the nude.

Pastor Parker said: “When Jesus was born he was naked, when he was crucified he was naked and when he arose he left his clothes in the tomb and he was naked. If God made us that way, how can that be wrong?
“I consider this a gift and a privilege God has given me as our members are caring, understanding and they’re community and family oriented. We have one of the most involved chapels anyplace around. I’ll put our church up against others around.”
.

Robert Church also justified getting married in the nude, saying that White Tail Chapel lacks the pretence sometimes found at other places of worship. He added that nudity is a great equaliser as it becomes impossible to judge someone based on their expensive or shabby clothes if they are not wearing any.
Subscribe to our Youtube Channel: