From ancient pyramids to military bunkers, there’s not much conspiracy theorists haven’t seen on Mars.

Now, in their latest bizarre sighting, alien hunters say they have spotted a mysterious ‘facehugger crab’ on the red planet.

Since the image was uploaded on Facebook, a number of people have said it looks like the facehugger monster shown in the 1979 film, Alien.

The ‘crab’ can be seen in an image taken by the Mars rover Curiosity, which shows a formation that looks like a cave mouth on the red planet.

The photo was taken by Nasa in July but recently appeared in Facebook group ‘Journey to the Surface of the Mars’, who has the slogan: ‘They will not tell the truth about Mars’.

Seth Shostak, director of the Centre for SETI Research said this is probably a case of pareidolia.

This is the psychological response to seeing faces and other significant and everyday items in random stimulus.

It is a form of apophenia, which is when people see patterns or connections in random, unconnected data.

Human eyes can spot faces within their environment and it helps them recognise friends in a crowd, work out how fast a car is travelling, and see patterns.

Scientists claim we also tend to use this ability to ‘enrich our imagination’ and recognise meaningful shapes, even when they’re not there.

‘Those that send [images] to me are generally quite excited, as they claim that these frequently resemble something you wouldn’t expect to find on the rusty, dusty surface of the red planet,’ said Shostak.

‘It’s usually some sort of animal, but occasionally even weirder objects such as automobile parts. Maybe they think there are cars on Mars.’

He added: ‘Recognising a crab in a landscape filled with wind-weathered rocks is no more surprising – nor more significant – than seeing a winking face in a semi-colon followed by a parenthesis. ;)’ 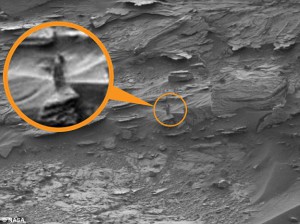 In another strange claim this week, alien hunters have seen what they believe to be a woman on Mars.

UFOvni2012 recently uploaded the image the image of the ‘woman’ on YouTube and it has seen been viewed more than 300,000 times.

‘It’s hard to tell if this is a living being, or a statue of a being from long ago,’ said Scott Waring from UFO Sightings Daily.

‘However, a statue that small would be eroded and destroyed easily, so it has a higher chance of being a living being.

One of the commentators on the footage suggested that the ‘woman’ is an alien version of the Statue of Liberty.

‘If she would be standing on that cliff you maybe a lot taller than anybody from Earth’, he said.

Previous article
Signs of the end of time : A PASTOR FROM ZIMBABWE KILLS WIFE AND THEN FLEES TO MALAWI
Next article
MUTHARIKA SAYS GOOD ROAD NETWORK VITAL TO DEVELOPMENT OF A COUNTRY