‘IN THE NAME OF GOD, KILL HER! SHE HAS BURNED THE QURAN! – THE KILLING OF FARKHUNDA

Farkhunda recited the holy Quran early every morning. She was kind and loved her family. Like many other 27 year olds, she had dreams and hopes.

Farkhunda’s mother Bibi Hajera says as she weeps: “That day, everything was normal, she left for her Quran reciting class; she was happy and full of energy.”

It was March 19. After her class, Farkhunda visited the Shah-Du-Shamshera shrine. She called her mother and said she would come home after the visit, but then she got in to an argument with a caretaker about the practice of selling charms.

During the confrontation, he accused her of burning the Quran, shouting: “In the name of God, kill her! She has burned the Quran!” Very soon, hundreds of men flocked to the shrine; they began beating Farkhunda, eventually killing her. The police failed to stop the attack.

Her brutal murder was filmed on mobile phones by those who stood and watched.  The graphic footage was quickly shared on social media. Many Afghans were shocked at what had happened and soon the news of her murder made headlines in international news.

Farkhunda’s mother watched the videos of her daughter being beaten and killed by the men. She says the fact that the police watched and did not do anything to save her torture hers and pains her heart. 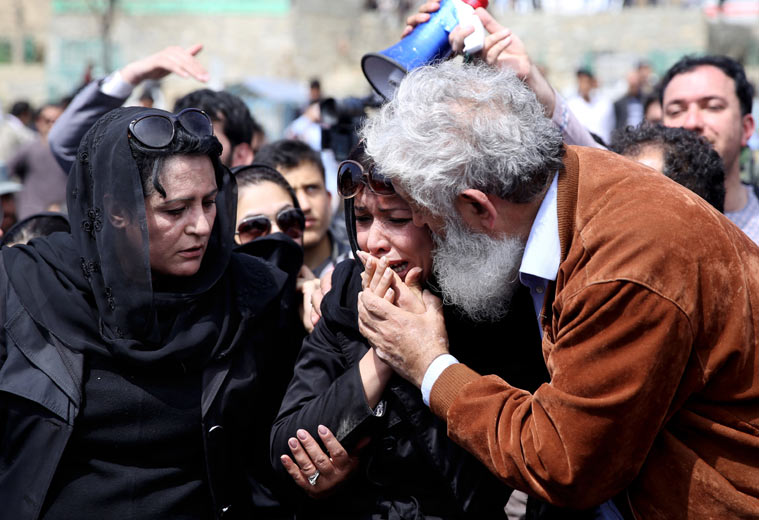 As an Afghan woman who has reported extensively about the life of women and girls in Afghanistan for more than a decade, I was determined to find out what was really behind this brutal killing, and why the police failed to protect Farkhunda.

In a new BBC World News Our World documentary, we speak to Farkhunda’s family, and have the first interview with the family of one of the men imprisoned for her murder.

Farkhunda’s murder was condemned by President Ashraf Ghani, who ordered an immediate investigation into the incident. Both the President and his wife, Rula Ghani, met with Farkhunda’s parents. Rula Ghani says, “What happened was barbaric… Farkhunda’s killing shows how violent Afghan society has become after more than 30 years of war.”

Farkhunda’s murder sparked one of the largest protests by women in Afghanistan’s history. The demonstrations became a symbol of the widespread discrimination against women and their lack of protection. In an unprecedented move, Sahra Mosawi, a woman’s rights activist, broke with tradition and carried Farkhunda’s coffin along with other women during her funeral.

Sahra says, “If Farkhunda was a man, this would not have happened to him.” She says: “Men who killed and attacked Farkhunda were mostly those who have lived in Kabul and have grown up as boys in Karzai’s government. They learned how to wear jeans and look modern but their mentality towards women hasn’t changed.”

49 suspects were initially charged in Farkhunda’s murder case, including 19 policemen. The trial was swift and broadcast live on TV. Eleven police officers were sentenced to a year in prison for failing in their duty, later in July they were freed on bail by the Kabul Appeals Court.  General Zahir Zahir, the chief of crime investigation of Kabul Police admits that they failed to protect Farkhunda. He says: “it is clear that our forces were not able to deal with people rioting, and when a big group of angry men attacked her, they were afraid for their own lives.”

In May, four men were sentenced to death, and eight others received jail terms for 16 years. However, at the beginning of July the Kabul appeals court quashed the death penalty to 20 years for three of the men and reduced the sentence to 10 years for the fourth, who is believed to be a minor. I spoke to the parents of the youngest perpetrator – Yacoob – who’d been sentenced for murder.  I wanted to know why he got involved.

His father Mohammad Yasin says: “He is a Muslim, he is young and when they shouted: “this person has become Jewish and burned the Quran,” he couldn’t control his emotions.” The parents ask Farkhunda’s family to forgive their son and ask the government to bring those who killed Farkhunda to justice, and he condemns the murder.

Women’s rights defenders believe that for a real change to take place, the pervasive misogyny of Afghan society must be eliminated, and equality within the legal system must be implemented. They admit that there is a long way to go. Maybe the next generation will have an Afghanistan that will accept and respect women with equality.