The Global Fire Power ranks countries of the world every year according to their military strength and fire power. In their ranking of African Countries With the Highest Military Strength and Fire Power, up to 40 different ranking tools and parameters like number of active front-line and reserve personnel, number of tanks and armoured fighting vehicle, aircrafts like fighters/ interceptors and helicopters, naval strength and coastal defence crafts, resources and defence budget, logistics and many other factors are used and in such an approach that a smaller country with good military intelligence competes favourably well with a highly populated country with lots of great foot soldiers while landlocked countries are not penalized for lack of an active navy. It is important to note that the military strength of a country is not only determined by the size of her ammunition. We bring you the list of 10 best countries in Africa with the highest military strength and fire power.

Egypt is a country in the north of Africa with a staggering population of 94 million people and has faced major political crises in the recent past but this has not changed its position as a leading African country when it comes to military strength. A significant percentage of Egypt’s population (over 35 million) are fit for active military service and more than 1.5 million individuals reach the military age every year. With almost 5000 tanks including armoured fighting vehicles, self propelled guns and towed artillery, Egypt is a force to reckon with when it comes to Africa. Having a total of 1,100 aircraft including 245 helicopters, 343 fighters, 390 trainer aircraft and 28 mine warfare, 84 serviceable air ports and a budget of over $4bn pumped into Egypt’s defence every 365 days make Egyptian military the strongest among other countries in Africa. 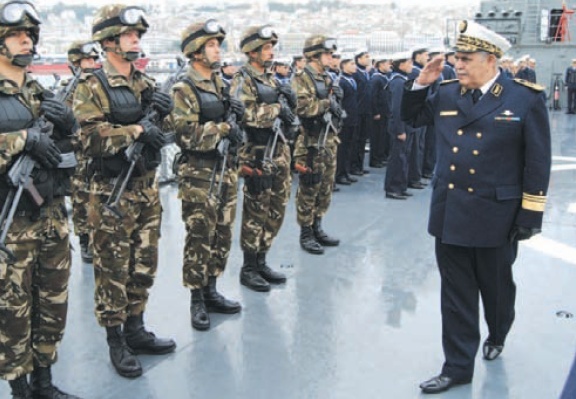 Algeria is a country consisting of 48 provinces and 1541 communes. It is the 33rd most populated country on earth with a population of 39.21 million. More than 20 million people make up the manpower and over 17 million citizens are within the active service year. Algerian military is made up of modern army, navy and air force. The country is largely financed by oil and Sonatrach, the national oil company, is the largest company in Africa generating revenues in excess of $76.1bn and employing over 120,000 people in 2012.

Algeria has the second largest army in Africa and in the Arab World, after Egypt, and has Russia and China as her strategic allies and arms furnisher. 672,993 individuals reach the military age annually. There are over 500,000 active front-line and 400,000 reserve personnel. Algeria is equipped with more than a thousand tanks, 1800 armoured fighting vehicles, over 400 air crafts, 188 helicopters, 6 submarines. With a defense budget of over $10.5 bn, Algeria will continue to be among the African countries with the best military strength.

Ethiopia has a population of 94.1 million. It is Africa’s oldest independent country and its second largest in terms of population. Ethiopia has found a way to transform her population into a military stronghold in Africa. With a manpower of 38 million people, 24 million of this population fit for active service and almost 2 million people reaching the military age every year, the country is one of the strongest in Africa. Ethiopia has over 560 tanks and 780 armoured vehicles, 183 multi-launch rocket system (MLRS), 81 air crafts and 39 helicopters to hover around any country plotting any form of invasion.The entire Ethiopia’s defence is supported by 182,500 front-line personnel and over $340 million defence budget to take care of things every 365 days.

Republic of South Africa, is an African country located at the southern tip of the continent. South Africa is the 25th largest country in the world by area and the 24th most populous country with over 54 million people. When it comes to military power, South Africa has got what it takes to be among the top countries in Africa strong enough to be recognised. Half of South Africa’s population are within the manpower class; 14 million are fit for service and almost a million people (964,139) are getting to military age annually. South Africa has 88,000 active front-line and 17,000 active reserve personnel. On military equipment, South Africa has 191 tanks and 1430 armoured fighting vehicles, 118 self-propelled guns, 240 rocket projectors and 213 total number of air crafts. 4 frigates and 3 submarines keep the shores safe and there is over $4.6 bn spent on defence every year. 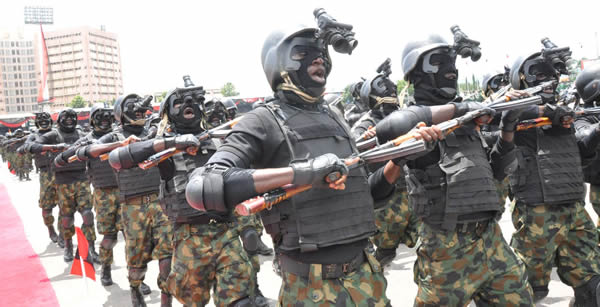 Located at the shores of West Africa is the country that is home to a staggering 170 million people. With the available manpower of over 72 million people, there are more than 40 million people who are fit for service with 3.5 million people reaching the military service year every year. Nigeria has 363 tanks, 680 towed-artillery and more than 1,400 armoured fighting vehicles. Nigeria has 96 total air crafts and 36 helicopters, 51 coastal defence crafts and 2 mine warfare. The large population is kept safe with a yearly budget of over $2.3 bn.

More African countries with the highest military strength and fire power continues on the next page with more tanks, armoured fighting vehicles (AFVs), fighters and interceptors just to name a few.

It is not cheap to maintain a standing army, navy and armed forces and it is a general rule that military strength goes along with economic power. This is the reason most countries with the largest economy are also among those with the highest military strength. In Africa, it is not wrong to say that the same principle applies because these top 10 African countries with the best military also happen to be among those with significantly strong economy.

Kenya is a major commercial and technology hub in the East Africa. Officially called the Republic of Kenya, the country has a population of about 41 million residents. When it comes to military strength and fire power, Kenya is a force to reckon with. The country has enough military strength to afford to always send some on a peace keeping mission in other African countries.
Almost 20 million people make up the country’s man power and more than 12 million of these are fit for service. 839,000 reach military age every year. Kenya has 24,000 active front-line, 5,000 active reserve personnel and boasts of 186 tanks, 2000 armoured fighting vehicles, 134 total air crafts, 66 helicopters, 14 coastal defence crafts and with Kenya’s defence budget on its course to hit $5 bn by 2018, we might see the country advancing way ahead of others on this list.

The kingdom of Morocco is a country in the northern region of Africa with a population of over 33 million. The country’s military arm known as the Royal Moroccan Armed Forces is responsible for land-based military operations but in addition to the army, Morocco also has the Navy, the Air Force, the Royal Guard, the Royal Gendarmerie and the Auxiliary Forces.
There are about 17 million available manpower with over 14 million people fit for service, 195,000 people in active front-line service and 150,000 in active reserve. Morocco has 1,348 tanks, 2,120 armoured fighting vehicles, 323 total aircraft, 139 helicopters, 70 coastal defence craft and spends over $3.4 bn in defence budget. 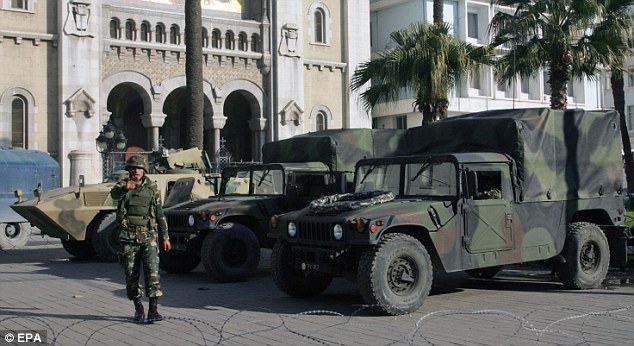 Tunisia is the northernmost country in Africa and home to over 10 million people. There are almost 5 million people who are fit for service out of the 5.7 million available manpower. The number of active front-liner personnel stands at 40,000 with additional 12,000 active reserve personnel. 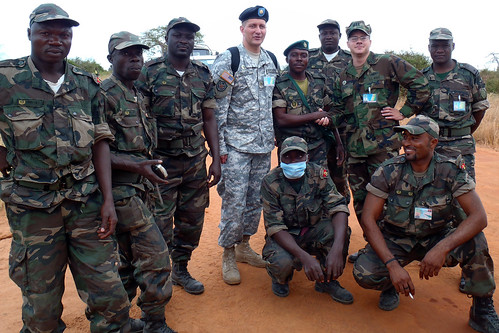 Angola is the 7th largest country in Africa with a population of over 21 million and is located at the southern Africa. There are three components of Angolan military: the Army, Navy and Air Force and all of these have a combined manpower in excess of 100,000 divided into 87,000 active front-line personnel and 30,000 active reserve personnel.

Angola has 140 tanks, 980 armoured fighting vehicles, 298 towed-artillery, 270 total number of aircraft, 98 helicopters with, 15 attack helicopters, 82 fighters/ interceptors. The country’s naval strength is boosted with 30 coastal defence crafts and 2 mine warfare and with a defence budget of over $4 bn, Angola is sure to continue to see a strong military growth. 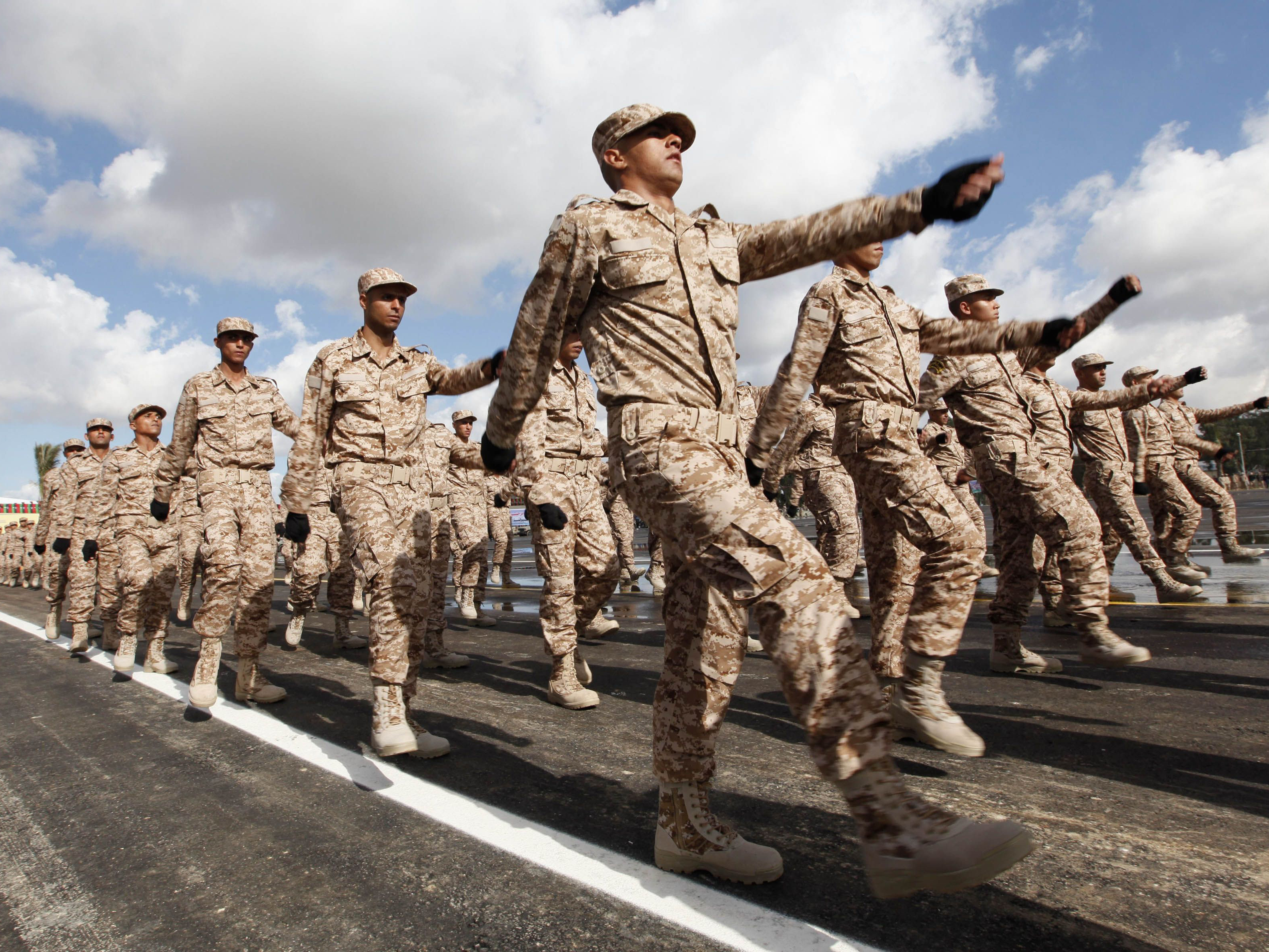 The 2011 Libya revolution has placed question marks on the military capabilities of a country with population of just over 6 million. Almost 3 million citizens are fit for service and just about 116,000 people reach service age each year but these small numbers correlate quite oppositely to the artillery and ammunition the country boasts of when compared with other African countries.

Libya boasts of 500 tanks, 2,500 armored fighting vehicles, 400 self propelled guns, 800 rocket projectors, 1050 potable AT weapons, over 600 air crafts and 121 helicopters and $880 million pumped in to defense every year.
Subscribe to our Channel on Youtube: