Three members of Osama bin Laden’s family were killed in a private jet crash when their pilot avoided a microlight and then landed too far down the runway.

The £7million private jet also issued six warning alerts before it plunged into a car auction site in Hampshire on Friday, an initial report has found.

Relatives of Bin Laden, including his stepmother and half-sister, were ‘incinerated’ when the Saudi-registered Phenom 300 jet crash-landed on to dozens of cars at Blackbushe Airport and burst into flames. 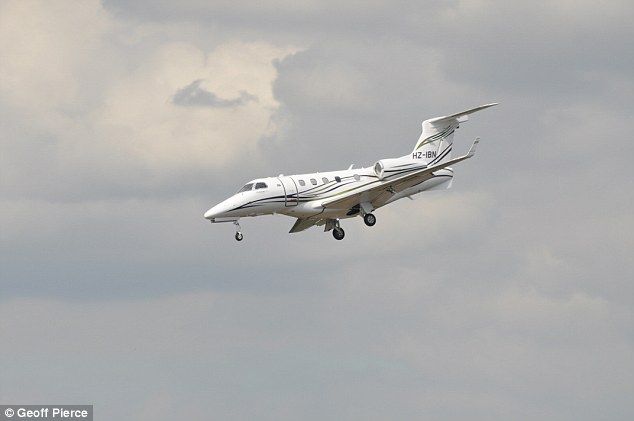 The pilot of the Bin Laden family jet – pictured here moments before the disaster – avoided a microlight and then landed too far down the runway, air accident investigators have found 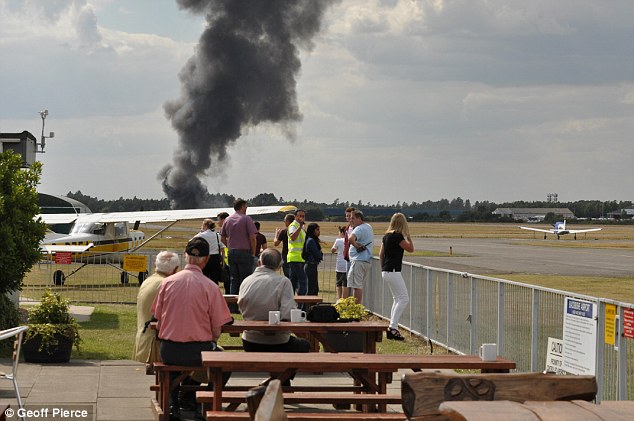 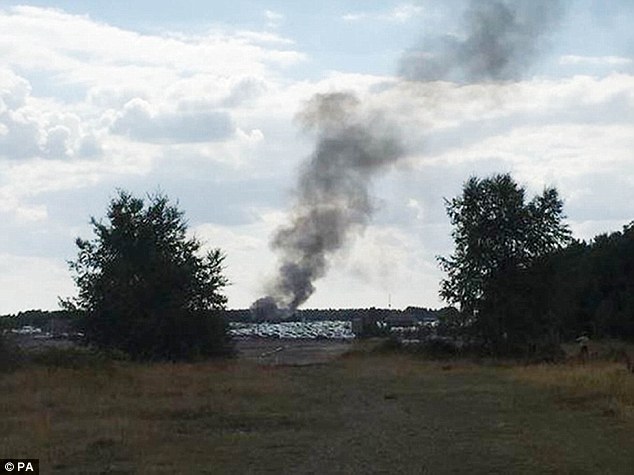 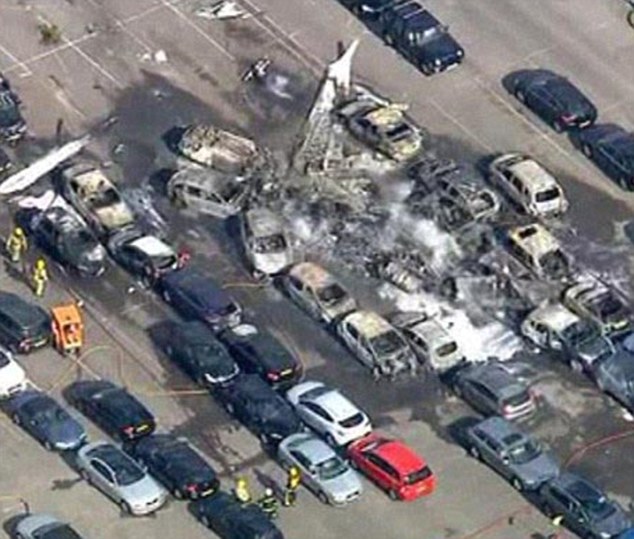 After leaving the runway, the plane collided with a one-metre high earth bank – causing part of the landing gear to detach and the plane to become briefly airborne. It then smashed into parked cars and burst into flames

The Air Accidents Investigation Branch said the plane, travelling from Milan, overtook a microlight aircraft after beginning its descent from cruise level.

The aircraft had communicated it was ‘clear of conflict’ when it was approaching the runway with the landing gear down, the report stated.

It then began ‘a very high-speed descent’, dropping at up to 3,000ft per minute.

During the descent, the aircraft’s Terrain Avoidance and Warning System put out six ‘pull up’ warnings on final approach.

According to the report, the Blackbushe runway has an available landing distance of 1,059m (3,474 ft).

After leaving the runway, the plane collided with a one-metre high earth bank – causing part of the landing gear to detach and the plane to become briefly airborne.

It then smashed into several parked cars 70 metres beyond the bank, losing its wings and bursting into flames. 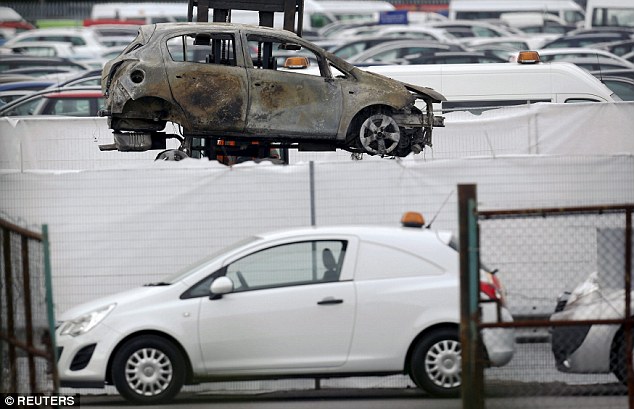 A burned-out car is removed from the site of the plane crash on Friday, which left the four passengers dead 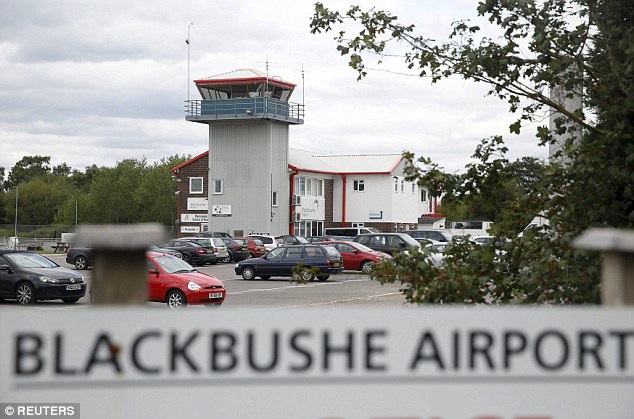 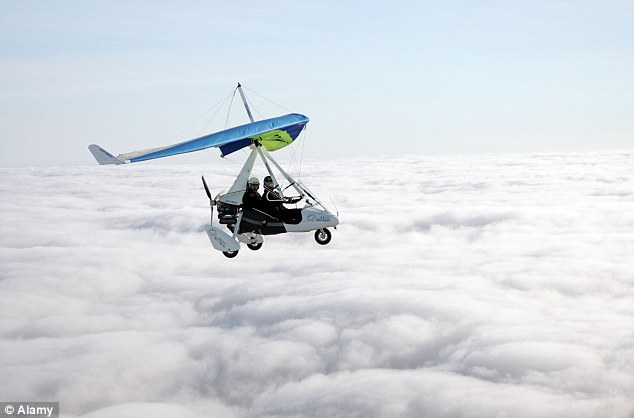 Coroner for North Hampshire, Andrew Bradley, who opened and adjourned the inquest into their deaths, said the bodies were ‘incinerated’.

They had been travelling to the UK on holiday from Saudi Arabia. 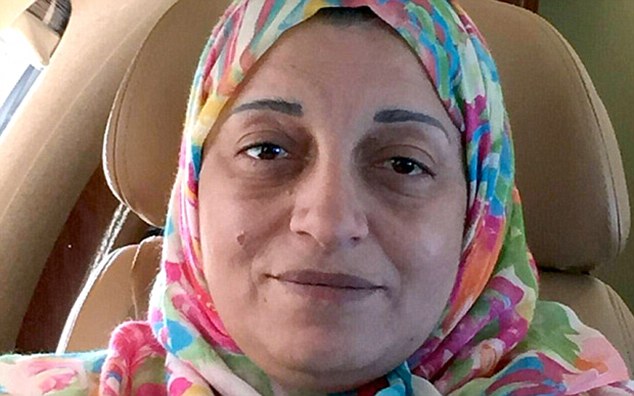 This image, which has been widely circulated online, is believed to show Sana bin Laden (pictured) the half-sister of Osama Bin Laden, 53, sitting on a plane. She died in the crash at Blackbushe Airport last Friday 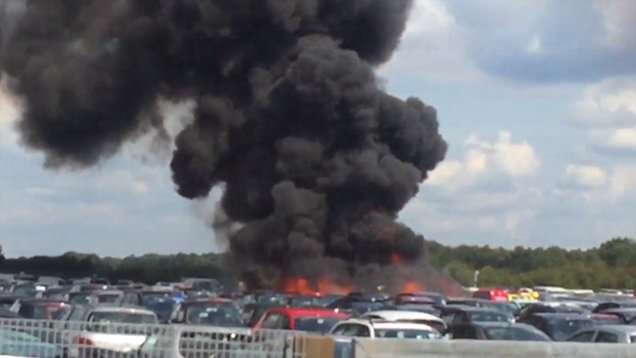 Saudi ambassador to the UK, His Royal Highness Prince Mohammed bin Nawaf Al Saud, offered his condolences to the Bin Laden family, who own a major construction company in Saudi Arabia.

A further statement said the embassy would work with the British authorities to ensure a quick repatriation of the bodies for burial. The plane had flown in from Malpensa Airport in Milan.

Bin Laden, who claimed responsibility for the September 11 attacks in 2001 in the United States, is believed to have had more than 50 brothers and sisters and many stepmothers.

His billionaire father Mohammed founded a sprawling construction company in the Sunni kingdom. He died in a plane crash in Saudi Arabia in 1967.

The Bin Laden family disowned Osama in 1994 when Saudi Arabia stripped him of his citizenship because of his militant activities. The Al Qaeda leader was killed by US forces in Pakistan in 2011.