A woman left a church in Bishopville, South Carolina, on Sunday, and was understandably startled at the sight of someone — or some-THING — running in front of some trees.

The shock lasted long enough for her to get a grip on her senses — as well as her phone — to snap a picture of what looks like a fast-moving lizard man.

To be more precise, it looked like something you might see on the Syfy channel at 3 a.m., when you see the cheapest in science fiction theater.

In a skeptical world where people complain about how supposed photos of Bigfoot or Sasquatch are always blurry, the picture above seems to suggest that lizard-like creatures don’t mind having their picture taken.

The woman who took the photograph — identified only as Sarah from Sumter, South Carolina — contacted ABC News 4 WCIV-TV in Mt. Pleasant, South Carolina, about her “encounter.”

“My hand to God, I am not making this up. So excited,” she wrote to the station, explaining how she and a friend saw the lizard man near the Scape Ore Swamp (see red marker in the following map).

Nearly 30 years of lizard man sightings have surfaced from the Bishopville-Scape Ore Swamp area. The first report can be traced to 1988 when a young man stopped his car on a road near the swamp to change a flat tire in the middle of the night, later claiming he’d been chased by the creature.

Eyewitnesses have described a 7-foot-tall, human-like being with green, scaly skin, three-toed feet and hands, according to AnimalPlanet.com. The reports also include glowing red eyes, like the ones in the lizard man picture at the top of this story.

A 2012 episode of the Syfy series, “Fact or Faked: Paranormal Files,” focused on South Carolina’s lizard man legend. The investigative team, led by former FBI special agent Ben Hansen, went deep into the forest near Bishopville and emerged with the following video:

“There was scant evidence out there of his existence, so we filmed what I call an ethical hoax as kind of a social experiment,” Hansen told HuffPost.

“The whole idea was to see how much buzz we could generate on social media and online just by having a really vague video showing a figure walking through the dark forest. 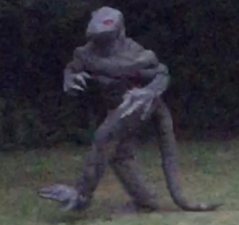 “So, we worked with a guy who specializes in transforming himself into a lizard man, using special effects. He helped us create a lizard man suit, which I wore. Being in South Carolina, one of my biggest concerns was to keep everybody else away from the area, because if hunters saw a lizard man walking through the forest, they wouldn’t ask questions before taking me down!”

This wouldn’t be the first time where an individual donned a costume of a mythical creature in an attempt to generate public reaction.

Hansen believes the picture taken of an alleged lizard man outside that Bishopville church on Sunday is dubious at best.

“This is an example of somebody pulling off a hoax by leaving nothing for the imagination,” Hansen said. “I wouldn’t be surprised when we see such blatant hoaxes like this come out that they are direct publicity stunts for tourism. It’s like a paparazzi photo of a celebrity walking down the street, yet this looks like Godzilla in a latex suit.”

HuffPost is quite familiar with lizard individuals — one, in particular. Erik Sprague, the self-proclaimed Lizardman, is a performance artist who transformed himself, through body modification, into a lizard. This included a full-body tattoo of green scales, cosmetic implants and bifurcated tongue.