The incident happened on Thursday when the deceased went to his gardern to cultivate and found the suspect wife cultivating his garden claiming to be their garden.

With anger the deceased threatened the wife and sent her back, she returned home and report to her husband (suspect) who got angry and met the deceased.

Both started fighting using a hoe and a panga knife and they both sustained multiple cuts and were referred to Ntchisi District Hospital.

The deceased was pronounced dead on arrival at District Hospital while the suspect got admitted.

Postmortem revealed that death was due to haemoragic shock secondary to severe loss of blood.

Meanwhile, enquiries are in progress

Police have identified the suspect as Rojas Chidambo while the deceased have been identified as Kenani Kafikeni, both from Chawala Village in the area of Traditional Authority Vusojere in Ntchisi.

PROPHET GOES BACK ON PROPHECY THAT MUTHARIKA WILL WIN 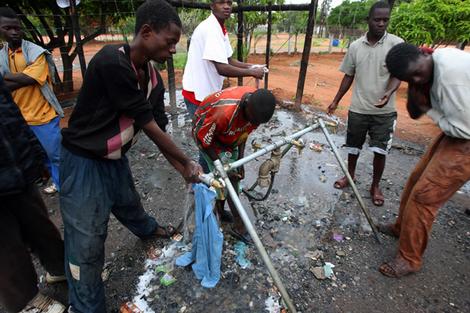