Two nightclubbers have allowed themselves to be filmed stripping naked – for a chance to win the now outdated iPhone 5s.

The ladies – one of whom was married – whipped off their clothes on stage in front of stunned guests.

At one point the MC snatched away the underwear of one of the contestants as she tried to cover her modesty and threw them into the crowd.

As she turns around to face the other way she dances to the music and is joined on stage by a second woman. 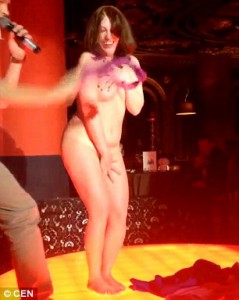 The embarrassing dance routine happened in the city of Berezniki – also known for its terrible air pollution – in central Russia’s Perm Krai region and up for grabs was an iPhone 5s.

Their amateur dancing, which was uploaded onto social media, did not go down well with the online community.

One person said: ‘Trying so hard for a stupid iPhone. Both these girls and the organisers of the show are brainless! Such an unimaginative community!’
Instagram user honeymary23 tagged her friends asking: ‘Is this the place they will celebrate their graduation from school?’

And she added: ‘Finished school ready for the world of skulduggery and lust.’

It is not known who actually won the mobile phone in the end.

A week ago two teenage girls, named Alina and Katya performed a strip tease in a nightclub in the city of Miass in southern Russia’s Chelyabinsk Oblast region for just 500 roubles (£5) each.