According to reports, the man of God, shared this powerful about another possible world war via the church’s Facebook handle (TB Joshua Ministries). Following the video which was posted on social media, TB Joshua said:

“We wish to remind our viewers of the prophetic warning Prophet T.B. Joshua gave on January 3rd

He said: ‘We have to pray for the President of North Korea. Pray for North Korea. The reason why I am saying is, I am seeing an arrow from there and it will affect the world, if not a section of the world. So, let us live at peace because the war we are fighting already both in Syria and others is still there. We cannot afford another one again. It would end the whole world. The whole would be in confusion. Because what I saw – there are some weapons there the world does not know about. If they throw that arrow, there will be confusion. Remember, there is fight everywhere. Adding this one to the fight means there will be confusion all over the world.” 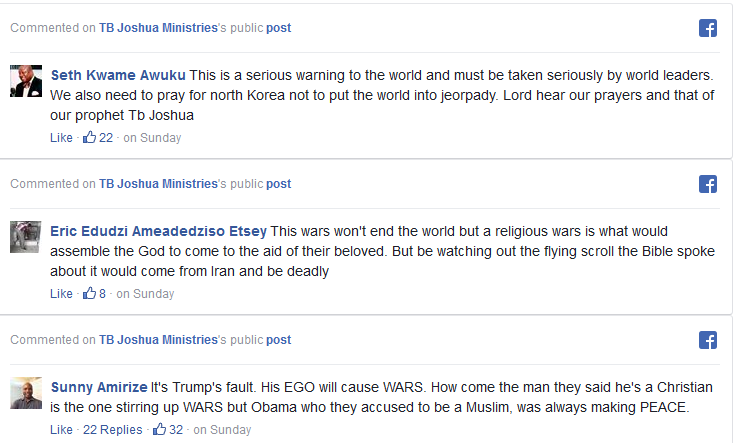 (Visited 57 times, 1 visits today)
Previous articleLadies, This Woman Says You Are Not a Complete Woman If You Don`t Have 365 Bras For The Whole Year
Next articleMBS to start impounding liquor packed in plastic bottles