A woman’s stomach grew as though she was pregnant, but instead of a baby, doctors found a snake in her tummy.

The woman has been in poor health for some time and doctors reportedly believe the snake is the cause of her deteriorating health.

Maria Tsotetsi, 49, of Vosloorus, east of Johannesburg, South Africa, claims that a bishop put the snack inside her. 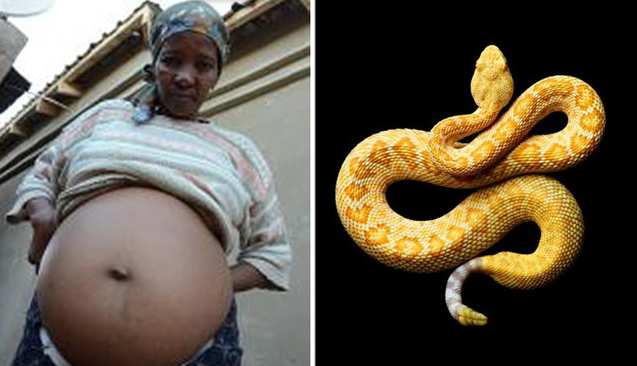 Tsotetsi, who looks pregnant, was in the hospital a while back, when doctors told her that she had a growth in her stomach.

“They said I had lost a lot of blood and I needed surgery,” she said.

But the family was too poor to pay for surgery and nothing happened after that. Nurses gave her medicine, and she was released from the hospital a few days later.

In an attempt to help, Tsotetsi, her then boyfriend, took her to a bishop to cure her.

According to Tsotetsi, the bishop told her to remove all of her clothes and he gave her muthi, a herbal medicine.

“The muthi was covered in white and brown snakeskin. The Bishop said this would cure me,” she said.

A few days later she became sick and her teeth began to fall out.

“I think the muthi made me lose my teeth,” she said.

After the visit to the bishop, her boyfriend of 14 years left her and she was unable to find love since then.

“I want him to come and remove the snake, which he placed in my stomach. I believe that the bishop is responsible for this.” Tsotetsi said.

Traditional healer Ntsimbi Ngema said: “This kind of thing is done by jealous lovers. There is no way Maria could have a new boyfriend because he could die after having sex with her”.