Some custodians of morals in the country has heavily doubted if the Miss Malawi contest really presents Malawian culture and beauty.

The argument comes barely after contestants in 2017 pageant were fond of hiding their flesh in the insufficient attires than displaying their beauty in traditional costumes.

One custodian, name withheld, said the contest is there only to promote immoralities, indecent exposure in the country.

“I don’t see any difference between these contestants and a female police officer who was fired over her nudes got leaked, maybe the difference is that the former group went unpunished for their nudes but instead receiving a Nissan Tilda for it,” custodian argued.

Another person, identified as Abusa said this only promotes prostitution in the country, how a normal Malawian man would marry a woman who got naked in public.

“I don’t see the importance of this contest in the country, it can only erode good values among our children.  I really doubt if this contest really represent beauty of Malawi queens, I mean beauty which means good to me,” said Abusa in anger.

The following are some of the comments after pictures of contestants were uploaded: 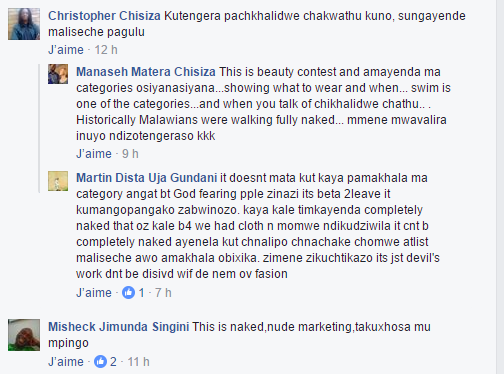