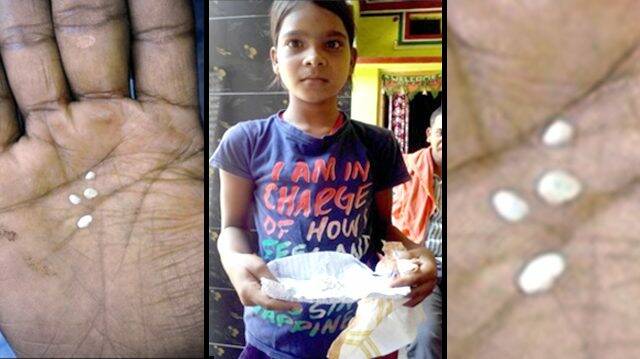 A young girl has been said to have been oozing what looks like cotton or pebbles from her eyes every day.

An 11-year-old from the Indian state of Madhya Pradesh has allegedly been popping out 35 to 40 small white pebbles of what looks like cotton from her eyes, every day for over two weeks.

Manasi, a sixth-grader from the village of Pachkhura, apparently started producing the bizarre white “cotton tears” on August 25, and her father, as well as the locals are convinced that she is possessed by a ghost.

Villagers have been avoiding the girl and her family ever since word got out about her condition, fearing divine wrath, and her parents are so superstitious that they have yet to consult an ophthalmologist.

According to Manasi’s father, Gendlal Kevat, she has been shedding between 35 and 40 “cotton tears” per day, for the past two weeks.

The local doctor came to see her after hearing about it from the other villagers, but after examining the bizarre white pebbles, all he could do was recommend that she be consulted by a professional eye doctor.

Nayi Duniya, the Indian paper that reported Manasi’s case, consulted several ophthalmologists about it. Dr Navneet Saxena, Dean and ophthalmologist of Medical College in Jabalpur, said that it could be just an allergic reaction that sometimes manifests itself as white discharge and thread coming out of the eye, while Dr Pawan Setak said that the condition is likely caused by a Vitamin D deficiency.

He added that malnourished children sometimes exhibit a white discharge from the corners of their eyes, which look like cotton.

Those explanations don’t make much sense to me, but, then again, I’m no doctor.

Manasi’s case does remind me of other bizarre eye conditions we featured in the past, like that of Saadiya Saleh, a Yemeni girl who cried stone tears, and that of Laura Ponce, whose eyes have been producing solid white crystals for over 20 years.