Police in Lilongwe are looking for suspects behind the murder of a 17-year-old girl whose body has been found in decomposed state in Chinsapo, Lilongwe.

Police reports that the standard 7 pupil was also gang raped before the murder.

It has been learnt that the victim was in a relationship with a boy who was among other boys in a crew called Ganja City based in Chinsapo.

Last year on 24 December, the two love birds had quarreled on allegations that are not yet known. Following the quarrel, the victimŌĆÖs boyfriend instructed his crew members to gang rape the young girl.

She was then told not to reveal the ordeal to anyone but she insisted she would tell the community and that prompted the Ganja City boys to murder her and dump her body in an abandoned toilet.

Her family and friends had been searching for her since that day until her body was recently discovered in decomposed state.

Meanwhile, police in Lilongwe have taken a step further to investigate the matter and bring the suspects to justice. 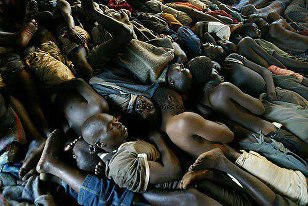 We are treating these teenage gangs in LL (Chinsapo, A36, A25) with kid gloves. Regardless where we stay, We are breeding hard core heartless criminals I can assure U!