National Statistics Office (NSO) has distanced itself from a MAP circulating on the social media depicting that the main opposition Malawi Congress Party (MCP) is more popular than the ruling Democratic Progress Party (DPP) under President Professor Arthur Peter Mutharika.

On Wednesday, the social media was awash with research MAP purportedly done by the National Statistical Office (NSO) indicating that MCP is more popular than any other party in the country. 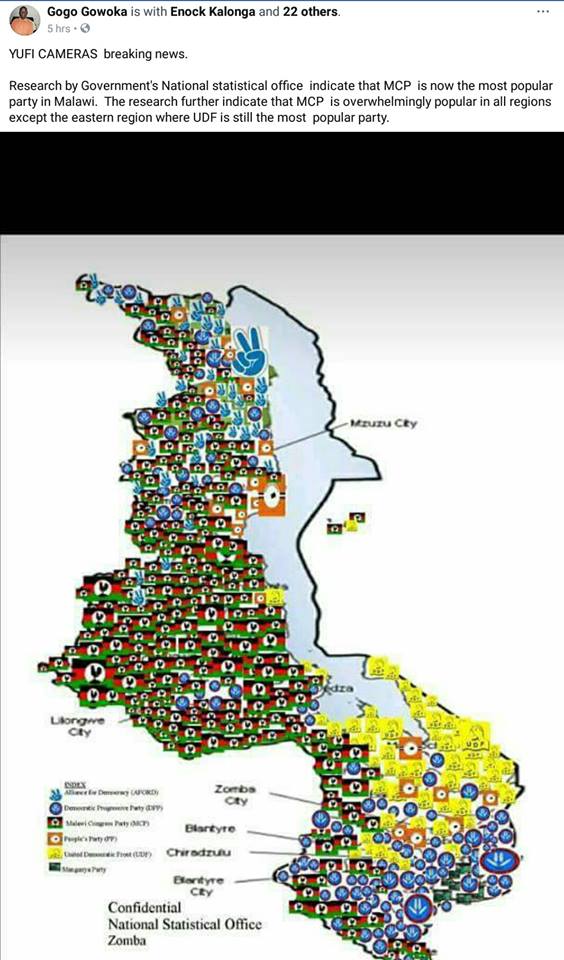 According to the said MAP, MCP is popular in all regions except Eastern Region where United Democratic Front (UDF) is much powerful than any other party.

But National Statistical Office has trashed the MAP, describing it as fake.

âThe National Statistics Office, (NSO ) has noted with concern, the circulation of a fake political map depicting the popularity of different political parties being shared in different social media fora citing NSO as the source.

âThe general public and all stakeholders are being informed that it is NOT in the mandate of NSO to produce such maps,â reads in part the statement.

Added the statement: âAs such, NSO would like to inform the general public to disregard contents of the fake political map and is requesting all to desist from such criminal acts of sharing false and misleading information in the name of the NSO.â

Meanwhile MCP is yet to comment on the MAP.

The Anti-Corruption Bureau (ACB) has been asked to reconsider...

UK based Malawian netballer Joyce Mvula will on Saturday,...

Unicaf University and the Malawi Defence Force (MDF) have...