Ugandan lawmaker and music star, Robert Kyagulanyi, popularly referred to as Bobi Wine escaped an attempt by the police to arrest him in southern Uganda on Saturday.

Bobi Wine was in hiding as at Saturday evening after reporting via Twitter that police had raided a hotel where he was resting ahead of an authorized show that evening.

“The police are looking for me everywhere. They have even blocked most roads in search for me! I will try not to avail myself to them – Arua is still fresh in our minds, & we know what they can do. 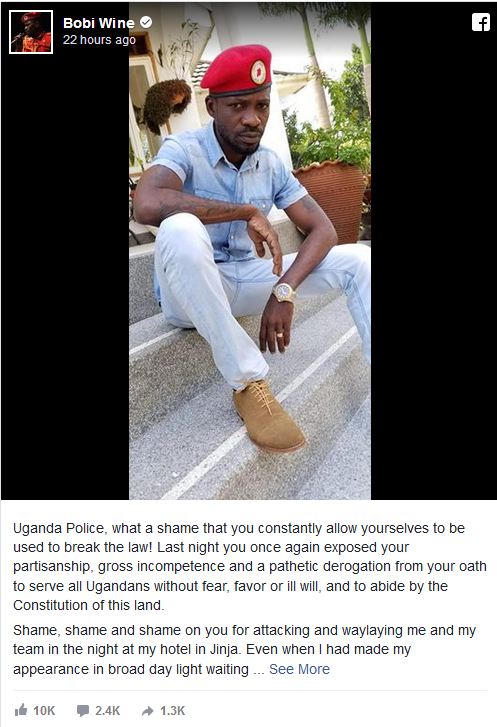 “But this injustice must end and we must put it to an end by ourselves,” his last tweet of Saturday evening read. It was accompanied by photos of police leading members of his team away.

The Police at the time of the raid were not known to have issued any arrest warrant for him. But Team Bobi Wine have since been escorted out of Jinga with the MP stating that some mebers had been assaulted and were being held in undisclosed locations.

In a Facebook post on Sunday, he called out the police and confirmed that despite their attempt to arrest him, he had managed to return to Kampala, the capital.

“Shame, shame and shame on you for attacking and waylaying me and my team in the night at my hotel in Jinja. Even when I had made my appearance in broad day light waiting to perform at a show which I was paid to sing at and which you cleared!” his post read in part.

A woman who was betrayed by her own husband...

A 16-year-old boy of Kapiri Mposhi who visited a...

President Dr. Lazarus Chakwera is expected to leave the...
FaceofMalawiNEWS