South African artist Lebani Sirenje, popularly known as Rasta, has done a portrait of late Zimbabwean jazz legend Oliver Mtukudzi, despite calls on social media for him to not pick his paintbrush up. 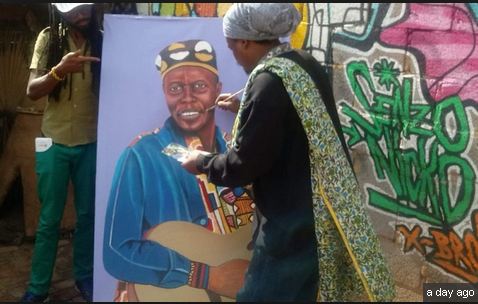 Rasta has risen to infamy over the past couple of years for his paintings mostly of prominent deceased South Africans which don’t really resemble them or don’t look like them at all.

Even very-much-alive President Cyril Ramaphosa has not been spared.

Mtukudzi died at the age 66 in Harare, Zimbabwe and predicting that he’d do a portrait, social media users pleaded that Rasta leave him alone.

One commentator commented, “Is this suppose to be Oliver Mtukudzi”

Another one laughed, “So this is our beloved Tuku hahahahaha!”

Also Mathanda wrote, “Rasta is out of order. This is not Oliver Mtukudzi!”

Mbalula Fikile said, “Someone needs to check if Rasta is not smoking the paint he paints with.”

However, the debate on the matter is still on going.