A deep-sea fish said to be the omen of earthquakes and tsunamis has been found in fishing nets off the coast of Peru, prompting a stir among locals.

The oarfish, which can reach over 30 feet in length, is thought to be behind some of the sea serpent myths of the west.

The Japanese word for this fish, ryugu no tsukai, means, ŌĆ£messenger from the palace of the dragon king.ŌĆØ According to folklore, the fish rise from the depths to the surface and beach themselves when an earthquake is coming.

Several oarfish fish have been┬Āwashed ashore in recent weeks in Japan, raising the profile of the legend around the world. So when reports surfaced of an oarfish caught in fishing nets off the northern coast of Peru, it caused a stir locally, especially after it was posted to a┬Āpopular Twitter account┬Āthat reports on natural disasters.

Many┬Ālocal┬Āmedia┬Āreports┬Āin Peru say that two oarfish were found in the town of Mancora, near the border with Equador. 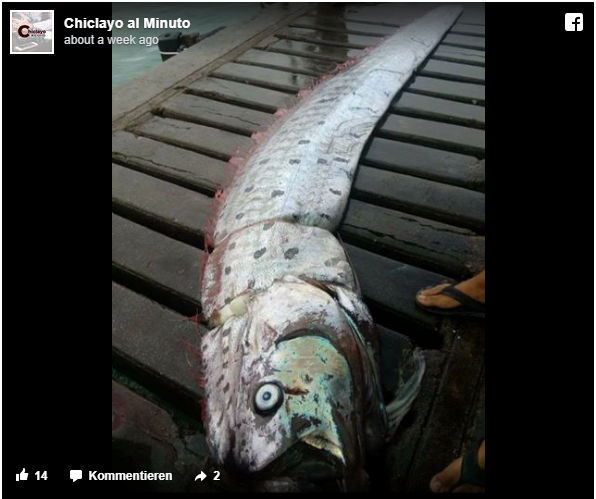 The reports mostly appear to stem from one source: a brief news post from local media outlet┬ĀChiclayo al Minuto, which posted three photographs of an oarfish on a gangway. 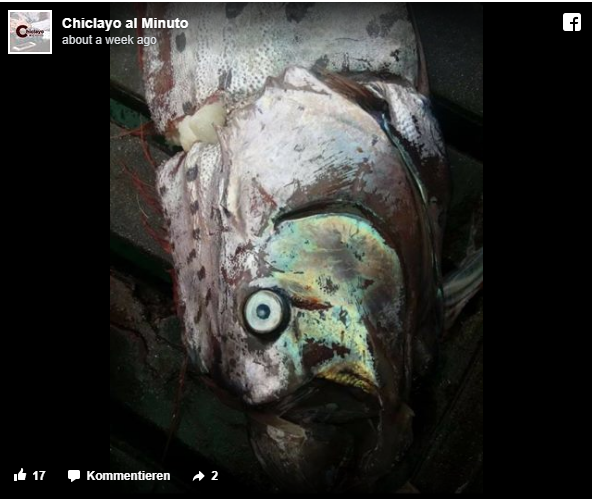 According to Chiclayo al Minuto, on the morning of Feb. 6, local fisherman found the oarfish in their nets. The fish, which was was about 16 feet long, initially confused them because they had never seen that species before on the northern coast of Peru. 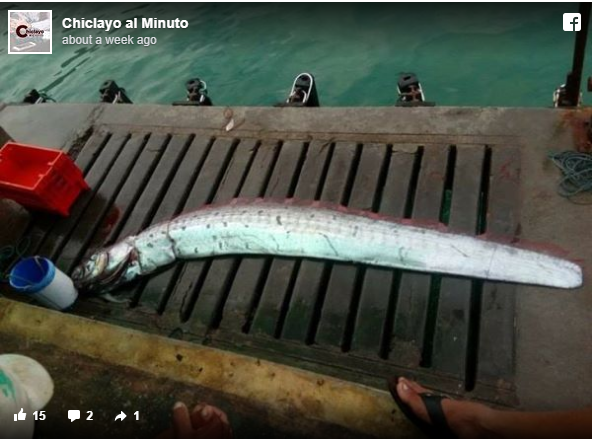 Last year, an oarfish was filmed after washing ashore on the southern coast of Peru near the town of Tacna, its characteristic long silver bodies and red fins clearly on display.

The oarfish is the longest bony fish in the world, with the longest specimen ever recorded being 35 feet.

Spotted Before the Fukushima Earthquake

Scientists say that there is no proof that Oarfish are able to predict natural disasters, though there are various theories as to how they might do so.

The myth of the Oarfish as a harbinger of disaster gained a little ground after the 2011 Fukushima earthquake and tsunami, which killed nearly 20,000 people. There were reports of at least a dozen oarfish washing up onto JapanŌĆÖs coastline in the previous year.

Hiroyuki Motomura, a professor of ichthyology at Kagoshima University,told the South China Morning Post┬Āthere is a more ordinary explanation for the fish appearing at Toyama bay.

ŌĆ£I have around 20 specimens of this fish in my collection so itŌĆÖs not a very rare species, but I believe these fish tend to rise to the surface when their physical condition is poor, rising on water currents, which is why they are so often dead when they are found,ŌĆØ he said.

But, according to Rachel Grant, a lecturer in animal biology at Anglia Ruskin University in Cambridge, it is ŌĆ£theoretically possibleŌĆØ that oarfish deaths could be a signal of earthquakes to come.

ŌĆ£When an earthquake occurs there can be a build-up of pressure in the rocks which can lead to electrostatic charges that cause electrically-charged ions to be released into the water,ŌĆØ she told Euro News in 2017. ŌĆ£This can lead to the formation of hydrogen peroxide, which is a toxic compound. The charged ions can also oxidise organic matter which could either kill the fish or force them to leave the deep ocean and rise to the surface.ŌĆØ 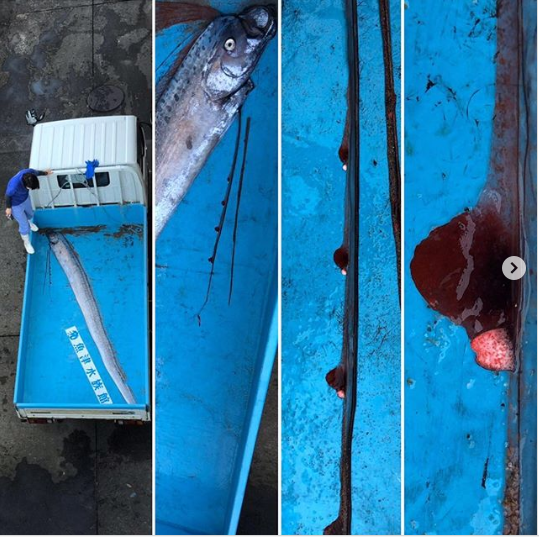 ŌĆ£There is no scientific evidence at all for the theory that oarfish appear around big quakes,ŌĆØ┬ĀUozu Aquarium keeper Kazusa Saiba told CNN. ŌĆ£But we cannot 100 percent deny the possibility.ŌĆØ

Saiba said one possible explanation is subtle changes in the earthŌĆÖs crust ahead of an earthquake ŌĆ£might cause the current to stir and push creatures at the bottom to the surface.ŌĆØ

Professor Shigeo Aramaki, a seismologist at the University of Tokyo, dismissed the fears of social media users as ŌĆ£nothingŌĆØ according to the South China Morning Post.

ŌĆ£IŌĆÖm not a specialist in fish, but there is no academic literature that has proven a scientific link to the behavior of animals and seismic activity,ŌĆØ he said. ŌĆ£I see absolutely no reason for concern and I have seen no updated reports of increased seismic activity in this country in recent weeks.ŌĆØ

Kiyoshi Wadatsumi, a specialist in ecological seismology,┬Ātold Japan Times┬Āin 2010, ŌĆ£Deep-sea fish living near the sea bottom are more sensitive to the movements of active faults than those near the surface of the sea.ŌĆØ 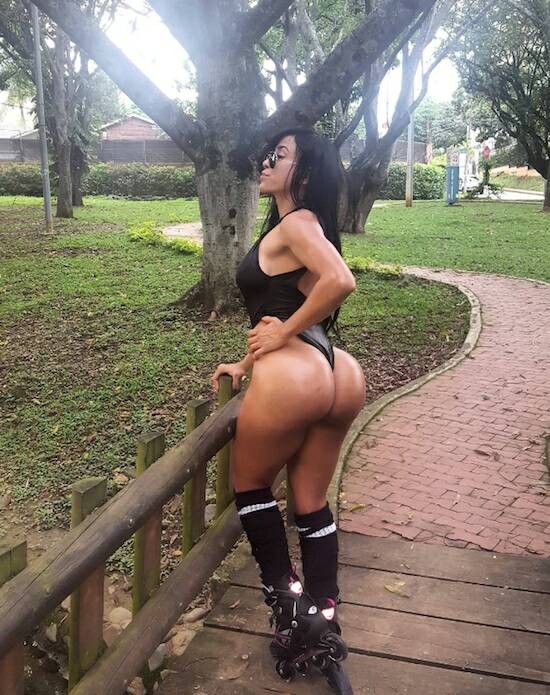 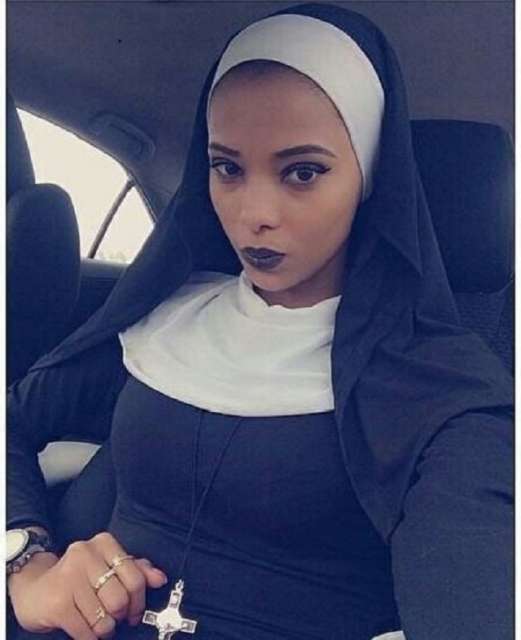