After announcing that he would go and confront Pastor Alph Lukau to apologize over his resurrection stunt, Prophet Mboro stormed his fellow pastor’s church in a black BMW where he held prayers outside the gate of the church with onlookers surrounding him to witness the drama. 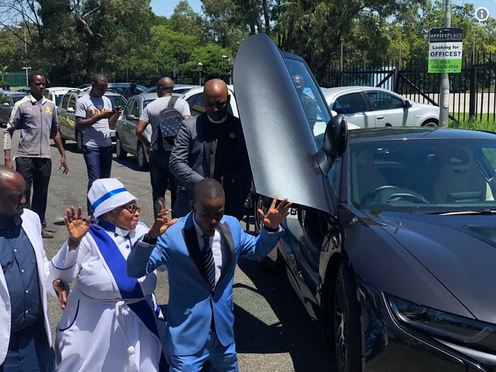 According to online media reports, Mboro was heard shouting that he did not come to argue with nobody but rather to get answers from Mr Lukau himself if really what he did was true.

“I’m not here to fight anyone, I’m here to get answers from my fellow brother in the Lord,” Mboro, of the Church of Incredible Happenings, shouts outside Mr Lukau’s church near Johannesburg.

Mboro continued to challenge the fellow man of God saying if it’s really true that he raised a dead man back to life then he should accompany him to go raise ex-president Nelson Mandela.

“If it’s true that you resurrected a man, then let’s go to Mandela’s grave to do the same.”

Previously, Mboro was also mocked on social media after he claimed he had gone to heaven and taken photographs using his smartphone.

Mr Lukau came under a heavily criticism on Sunday after a viral video showing the supposed resurrection was widely mocked.

It shows Mr Lukau shouting “rise up” to a man lying in a coffin who then jerks upright to cheers from worshippers.