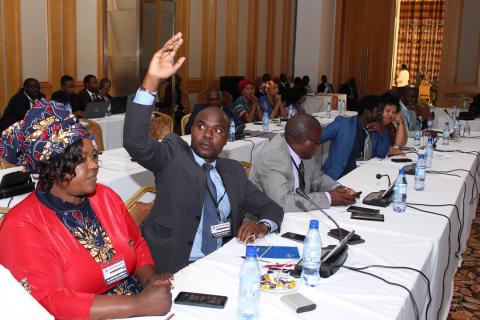 The 2019/2020 Budget Session of Parliament is scheduled to take place in September 2019 and not the usual June-July owing to the need to put in place new structures for the newly-elected Members of Parliament (MPs).

He said it was important that Parliament through the yet to be set Business Committee of the House, first put in place committees that are mandated to scrutinise and provide guidance for the deliberations on the budget.

Manzi pointed out that, “The Business Committee will discuss and agree on specific dates that the House will meet to discuss the budget.”

He added that in order not to stifle government operations, Minister of Finance would bring before the house, a resolution seeking to authorise government to spend money for three months as the actual budget is being discussed.

Manzi took the MPs through the expected decorum required of them as ‘honourables’ so that they don’t bring disrepute to the house and themselves.

The new cohort of Parliamentarians has impressed Manzi who said so far, the punctuality, attendance and participation has been impressive who hoped they would continue doing so.

Democratic Progressive Party (DPP) Director of Elections, Ben Phiri said they are there to serve the nation hence as one of the new MPs, they would make sure they don’t let the nation down.

The first meeting of the 48th session of Parliament is expected to be inaugurated by President Peter Mutharika on Friday, June 21, 2019 with the full sitting of Parliament scheduled to start on June 24, 2019.

The MPs have been meeting in Lilongwe from Monday getting themselves acquainted with procedures and workings of Parliament with resource persons coming from Parliament, the Judiciary, academia, international partners and others.

Swearing-in of the MPs will take place on Monday and Tuesday followed by the election of the Speaker and deputies on Wednesday.