Minister of Information and Technology Mark Botomani has said the organizers of nationwide demonstrations will pay the damages that protesters have caused.

Botomani said this during a news conference in Lilongwe at parliament building.

The Minister expressed shock and dismay on how the protestors handle current demonstration where a lot of public and private properties have been vandalized.

In his remarks Botomani said the Human Rights Organizations (HRDC) have failed to keep their promises to hold peaceful demonstrations hence they will pay for the damages.

He further threatened that those who are enemies of peace they will be dealt with accordingly.

“Government would like to warn those who hide behind opposition parties and Civil Society Organizations (SCOs), and are coming up with strategies to disturb peace.” Botomani said.

He continued; “We have witnessed demonstrations that were characterized by looting, vandalizing and assaulting.”

He further added that all those involved in the barbaric acts will not be spared citing that they will be brought to book. 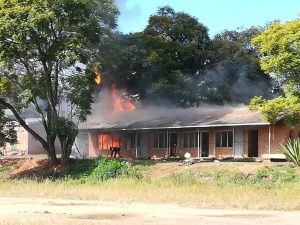 Meanwhile, the HRDC have distanced themselves from the looting and vandalizing of properties.

During the July 4 demonstrations, protestors in the Northern region turned into violent as they vandalized public properties.

The CSOs under the banner HRDC are the organizers of the ongoing demonstrations in a quest to force the Malawi Electoral Commission Chairperson Jane Ansah and all the commissioners to step down as they are being accused of mismanaging May 21 elections.