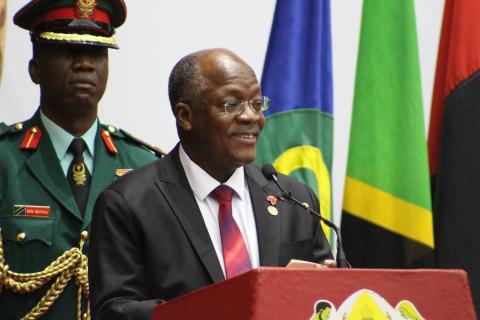 The Southern Africa Development Community (SADC) has approved Kiswahili as the fourth regional official working language to be implemented gradually.

This is in recognition of its contribution and Mwalimu Julius Nyerere’s role during the liberation struggle. The three languages that were already being used by Sadc include English, French and Portuguese.

Swahili will be the first indigenous language to be used by the bloc as an official language at inter-state level.

Kiswahili would be adopted at the level of Council and Summit, first as a language for oral communication, before eventually being adopted for written official communication within SADC.

Kiswahili is an official language of the African Union and the lingua franca in most of east Africa and parts of central and southern Africa.

The theme for 2019 Sadc Summit was: “A Conducive Environment for Inclusive and Sustainable Industrial Development, Increased Intra-Regional Trade and Job Creation.”

Malawi’s vice president Everton Chimulirenji who represented President Peter Mutharika at the summit said: “Malawi will benefit a lot from the Summit because there are a number of agreements that have been made such as agreements to increase intra-trade and job creation within the SADC region. There is no sense in selling commodities outside SADC when our neighbouring sisters and brothers need such products.” He also said the summit resolved that member states should promote women representation in politics and economic decision making because, like men, they also contribute towards achieving economic growth and development in the region.

“However, I would like to urge all Malawians and other stakeholders to make sure that when good ideas, strategies and policies have been created and shared, let’s start implementing them to develop our country,” said the veep.

During the summit, the the vice president, on behalf of  the Malawi leader, Prof.  Arthur Mutharika, signed SADC protocols among them were protocol on industry, inter-state transfer of sentenced offenders and  protocol on extradition.

In his comment on the 39th ordinary summit focus, Minister of Industry, Trade and Tourism, Ibrahim Salim Bagus MP said: “Economy cannot grow without industries. It is very good for SADC to concentrate on industrialization. Our industries or factories should not die.”

The minister expressed happiness that Sadc was constructing the Angola-Namibia, Mozambique-Malawi and Zambia-Tanzania-Kenya Power Interconnectors to help connect power networks of the three non-operating members of Angola, Malawi and Tanzania — to the regional grid.

He said energy enhancement would make industrialisation affordable and thereby increase production, employment and economic growth in factories and the country at large.

However, the current SADC chairperson, Dr. John Magufuli President of the United Republic of Tanzania, during the summit, singled out poor information sharing among member states as one of the reasons crippling intra-trade and economic performance in the region.

Presenting a communique at the end of the 39th SADC summit, Dr. Stergomena Lawrance Tax, Executive Secretary of the SADC said, among others, the Summit noted with great concern the slow growth in the intra-SADC trade levels, and that the region continues to export unprocessed raw material to the rest of the world, thereby forfeiting the potential benefits of the resource endowments. To this effect, the Summit agreed to accelerate the implementation of the industrialization strategy.

The Summit approved the Revised Roadmap towards the full Operationalization of the SADC Regional Development Fund. The Fund will provide mechanism to mobilize resources from member states, development partners and private sector to support regional development and deepen regional integration.

Malawi signed the Agreement establishing the Fund in August, 2018 during the last Summit in Windhoek, Namibia.
Summit urged Member States to expedite the implementation of energy projects within Southern Africa Power pool and to explore other means of generating electricity in addition to hydro power.