October 11, 2019
Nigerian Vice-President Professor Yemi Osinbajo has insisted that only a few countries in the world can claim to have a low level of corruption, but that none is in Africa. 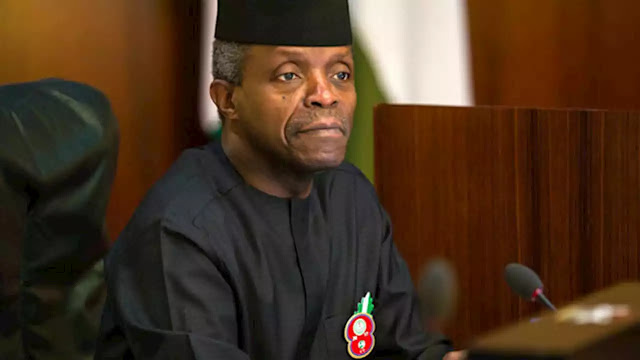 Osinbajo spoke yesterday in Abuja at the launch of the FLAG’IT App by the Akin Fadeyi Foundation.
Represented by the Special Adviser to the President on Rule of Law, Office of the Vice President, Fatima Waziri-Azi, the vice president explained, “The 2019 Global Corruption Barometer on African citizens’ views and experiences of corruption highlights that while most of the people surveyed in 35 countries felt that corruption had increased in their country, a majority equally felt that they, as citizens, could make a difference in the fight against corruption.
“Only a few countries in the world can claim to have a low level of corruption and none of these countries is in Africa.”
According to him, there was a consensus that corruption and illicit financial flows out of Africa relentlessly delay development, worsen practically all human development indices and trap the majority of her people, especially the most vulnerable, in misery and poverty.
He continued  “It doesn’t matter how much revenue a country generates or how transformed it is or how progressive its plans, corruption will ensure that majority of the people do not benefit from whatever gains are made, which is why despite the highest oil revenues in our history, debt doubled and poverty figures rose. This is why the major pillar of this administration’s socio-economic agenda is the fight against corruption.”
Chairman of the Presidential Advisory Committee Against Corruption (PACAC), Professor Itse Sagay, at the event, decried the opportunity the country missed as a result of looting by ex-governors, ministers, legislators, public servants, bankers and businessmen between 2007 and 2013.
Sagay disclosed that the total sum looted was N1.35 trillion($3.7 Billion)
“One-third of the stolen funds could have provided 635.18 kilometre of roads, 36 modern hospitals per state, 183 schools, educated 3,974 children from primary to tertiary level at N25.24 million each and built 20,062 units of two-bedroom apartments.” He said
This, he said, clearly epitomises a dog-eat-dog phenomenon, adding that there is devastation in all spheres of human activity and the future of the youths certainly eaten.
(Visited 64 times, 1 visits today)
Africa

A Tanzanian MP angered by the poor conditions of...

As known, HIV/AIDS is a deadly disease, and it...

Until recently, when you left a WhatsApp group, the...

You might have heard that peeing after s3x is...
FaceofMalawiNEWS