October 18, 2019
Nigeria’s First Lady Aisha Buhari on Wednesday apologised over a viral video that showed her arguing with her husband’s niece at the presidential palace. 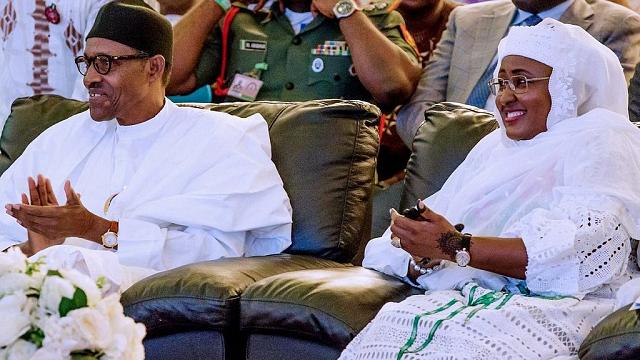 Buhari who was hosting a delegation of wives of politicians, urged them not to be distracted by social media, and instead continue the ‘good work you are doing in collaboration with my Future Assured Program’.
“I used the opportunity to apologise for the embarrassment I might have caused my children, my immediate family members, well meaning Nigerians and the institution I represent, on the circulated leaked video clip,”
she posted on Instagram.
The president’s niece, Fatima Mamman Daura, recently explained that she filmed the video herself in 2018 but denied circulating it.
The First Lady on Saturday dismissed rumours circulating online that her husband plans to take on a second wife, cautioning against the rise of fake news in the country.
Aisha, who had been on holiday in the United Kingdom for two months, returned to the country, at a time when a video was circulating on social media, purportedly showing that she had been denied access to the presidential residence.
While she confirmed the authenticity of the video, which showed her complaining about huge deployments of security, and asking unidentified people to leave the palace, she clarified that it was an old video.
Aisha dismissed rumours that president Muhammadu Buhari intended to marry fellow politician Sadiya Farouq, who was recently appointed Minister of Humanitarian Affairs, Disaster Management, and Social Development.
Her spokesperson later issued a statement saying the First Lady was happy to be aback in the country after a ‘deserved rest’.
‘‘She confirmed that she was fully rejuvenated to continue the work of improving the health and well-being of women, children and other vulnerable Nigerians,’‘
Suleiman Haruna said.
Ruling party officials also added to Buhari’s voice, warning against the negative impact of fake news.
‘‘I wholeheartedly welcome our dear First Lady back to the country. Her elegant return has put full stop to fake news which dominated our public domain,’‘
a publicity secretary of the APC Kate Ofor told local journalists.
‘‘I think we have to not only find legitimate means to curb fake news, but also come to terms that social media have no gatekeeper. Therefore, we must cultivate the culture of sieving the genuine from fake news.’‘
Buhari herself had cautioned that the courge of Fake News ‘could lead us to something unimaginable’.
The president himself has repeatedly warned against the rise of fake news and hate speech in Nigerian discourse.
Credit : kioo17journal
(Visited 145 times, 1 visits today)
Trending