In Cairo, Egypt-Archaeologists discovered mummies earlier this year in Luxor which were estimated to be 3,000 years old. Photo courtesy Egypt’s Antiquities Ministry

On Saturday, The Archaeologists  opened the coffins of two of the 30 mummies discovered earlier this year and estimated to be 3,000 years old. 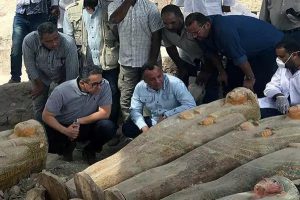 In April, the remains were found by accident under a mound behind the Asasif Necropolis on the west bank of the Nile river in the Valley of the Kings. The archaeologists were conducting an unrelated dig when one coffin was found, Mostafa Waziri, secretary-general for Egypt’s Supreme Council of Antiquities, told NBC News.

On Saturday, two of the coffins were pried open during a ceremony in Luxor. The others were opened earlier.

The coffins, which were adorned with paintings and inscriptions, contained preserved mummies of 23 adult males, five adult females and two children. The adults were most likely priests.

“This discovery is one of the largest and most important discoveries that have been announced during the past few years as it includes so far more than 20 colored wooden human coffins, in a distinct state of conservation, colors and inscriptions in full and are still closed, and were revealed in the situation that left them,” the Antiquities Ministry wrote on its website. “The ancient Egyptian where they were found gathered in a cache in two levels, one above the other.”