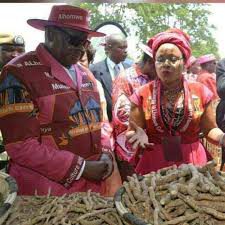 A picture of President Peter Mutharika inspecting Gondolosi has been compared widely to photos of other African leaders on social media.

On Sunday, the president was pictured at the Mulhako wa Alhomwe Festival in Mulanje where he inspected the popular aphrodisiac.

Malawians have compared the photo to pictures of other African leaders inspecting developments in their countries.

The other African leaders include Rwanda’s Paul Kagame who was pictured at the launch of a high tech smartphone factory in his country and Tanzania’s John Magufuli who was pictured in a cockpit checking out a newly procured plane.

“We focus on mediocrity here,” said a Facebook user commenting on the photo.

Another one said: “The photos show our countries have different goals.”