About 600 women in Shale,Zimbabwe confessed to prophets that a mysterious snake would lick their privates before sleeping with them.

The distraught women confessed during a cleansing ceremony conducted by prophets who are known in the area as Izithunywa zenkosi that they were sexually tormented by a mysterious snake. 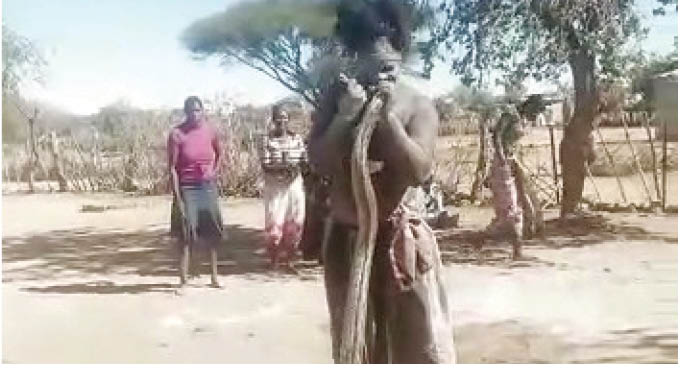 For Izithunywa zenkosi to cleanse them, the troubled women paid $1 800.

In separate interviews, the women narrated their ordeal saying during the night they would feel dizzy and a few minutes later something would sexually attack them. Some said they would see a snake in a vision and later on they would feel some itching on their private parts.

Nobuhle Moyo said she woke up without undergarments but with semen stains.

“I would wake up feeling tired and with semen stains on my private parts. At first I thought I dreamt about my husband who is based in South Africa.

“But after that it would happen twice a week and I had to consult a prophet who revealed to me that a mysterious snake was sexually tormenting me. I asked him to get rid of it but he failed,” she said.

Anita Chiimba said during her sleep she would feel something like a snake licking her private parts.

“During my sleep I would feel something like a snake moving on top of me and soon after that it would lick my private parts.

Rita Simali said on several occasions she would wake up without underwear.

“I would wake up without underwear and feeling extremely tired like someone who had slept with me and this has been happening for the past four weeks.

During my sleep I would also feel something sucking my breast. It happens even when I’m sleeping with my husband. We have spent large sums on traditional healers trying to get rid of it but without success,” she said.

She said as a result she had failed to get sexual satisfaction.

Village head Duvert Ndlovu confirmed : “ Yes I can confirm that more than 600 women confessed during a cleansing ceremony held by prophets(Izithunywa Zenkosi) that a snake named Bornwell was sleeping with them.

“That snake was killed and buried in a grave. In ward 8 which is under my jurisdiction there are about 695 homesteads so each family contributed $3 each for exorcism.