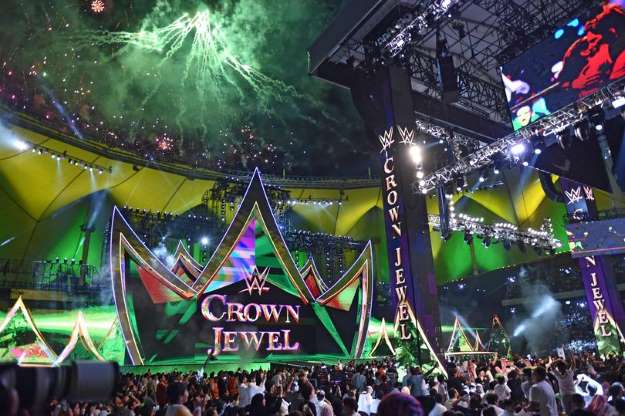 Nearly 200 wrestlers and crew were held ‘hostage’ by Saudi Arabia in retaliation at WWE bosses pulling the live feed to last week’s Crown Jewel contest in a row over money, it is claimed.

The furore led to many of the Smackdown stars missing a live show in Buffalo, New York, the following day – with the no-show being blamed on ‘mechanical issues’ which stopped their 747 plane leaving Riyadh.

But it’s now being claimed that the real reason for the delay was because the angry Saudi ruler, Crown Prince Mohammed bin Salman (MBS), had ordered 175 stars and production crew off the plane to sit on the tarmac for six hours.

According to US reports, MBS was furious that WWE boss Vince McMahon had pulled the plug on the live feed of Crown Jewel in Saudi Arabia because the company was owed up to $500m (£390m) for two shows in Saudi Arabia last year.

The two sides hastily reached an agreement which meant the show was eventually broadcast only 40 minutes late, but this did not stop most of the WWE entourage’s 14-hour flight home being delayed a day.

Some – including McMahon and stars such as Hulk Hogan and Tyson Fury – managed to get out on their own private jets but most of those who were left behind were enraged and vowed never to go back.

Wrestler Karl Anderson said on Twitter “Couldn’t pay me enough to go back..well, that’s not true, I need a second pool, so…”

To which his wife, Tini, said: “Don’t ever go back AGAIN!! We don’t need our daddy/papi/motherlover/absanderson/besttagteam etc being held hostage while we’re at home worried to death”.

Sports journalist Dave Meltzer told the radio station, Wrestling Observer, that tensions grew when military police were sent to the airport in Riyadh.

He said: “The talent felt they were hostages…nobody was harmed or anything like that. It’s a really tense story..”

Some observers thought that if the delay was caused by mechanical problems, another plane could have been chartered which would have got them back to the US sooner.

Former WWE announcer Hugo Savinovich posted a video on Facebook saying the real reason for the flight delay was Saudi retaliation for the live feed being pulled by WWE.

The website wrestlingnews said that, according to the footage, he thought ‘the Crown Prince was so upset by the feed being cut off that he ordered to have the wrestlers be taken off Atlas Air just before the plane was about to take off.’

WWE launched in Saudi Arabia in 2014, with two to four shows a year in the desert kingdom.

The contests have continued despite criticism from campaigners over the country’s human rights record and the murder of the Washington Post journalist, Jamal Khashoggi, in the Saudi consulate in Istanbul a year ago.

Last week CNN reported that WWE’s share price had fallen 25% this year amid speculation that this might to due to its failure to sign a new TV deal in the Middle East.

The sports entertainment company has signed a deal with BT Sport which begins in January 2020, but exact details have yet to be announced.