SOUTH AFRICA – Goods worth thousands of dollars went up in smoke yesterday morning when a Zimbabwe bound bus caught fire and was reduced to a shell. 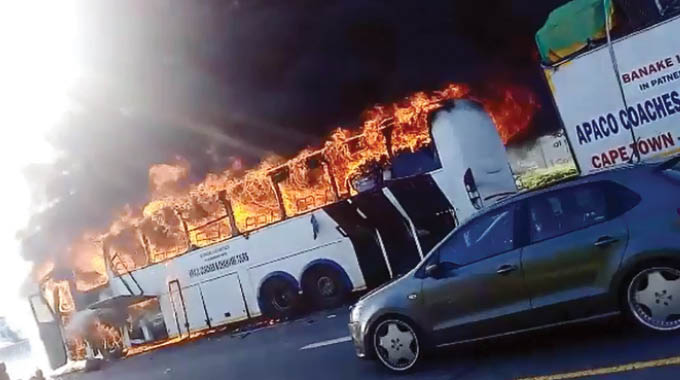 The incident occurred in Johannesburg, Gauteng province, along the N1 North highway near William Nicol Drive in the early hours of yesterday morning. The bus, towing a trailer written Banake Logistics, Apaco Coaches and Chamvari Tours, was travelling from Cape Town to Harare.

Throughout yesterday, pictures and videos of passengers escaping from the burning bus circulated on social media platforms. The bus had 44 passengers, mostly women and children.  Some of the passengers could be heard wailing saying they lost everything.

“We spent the whole year toiling to take something back home for our families but everything is gone and now reduced to ashes. What curse is this,” wails an unidentified woman in the video.

“My children’s books, all their stationery, our food, I have not salvaged even a single pair of shoes, I have lost it all. What will become of us? All my months of hard work this year is gone. I worked for nothing. My children will starve,” she wailed.

The Johannesburg Metro police department spokesperson colonel Wayne Minaar said in a telephone interview that no serious injuries were recorded although people lost their goods.

“A bus caught fire on the N1 North and William Nicol Drive this morning. There are no leads yet as to what caused the fire but investigations are underway. Both the bus and the trailer were reduced to shells. It is  fortunate that there were no deaths or serious injuries. The passengers however lost everything,” he said.

Colonel Minaar urged bus operators to abide by road rules and regulations and ensure that their vehicles are roadworthy.

Sources said the bus was travelling from Capetown to Harare.