Kenyan Opposition leader Raila Odinga on Tuesday morning through a post on Twitter mourned George Floyd who was murdered by police officers in the US.

In his tweet, Mr Odinga who is the Orange Democratic Movement (ODM) party leader, said that he had said a prayer for the family of the deceased.

‚ÄúI join thousands out there to say a prayer for the family of George Floyd, and more importantly, for the US a prayer that there be justice and freedom for all human beings who call America their country and that citizens be judged by the content of their character and not the color of their skin,‚Äù Odinga said in his statement.

‚ÄúIt is a dream America can fulfil for George and all its citizens. It is a dream we in Africa too owe our citizens, even as we stand with Floyd‚Äôs family in the US,‚Äù he further said.

Floyd, 46, died after being arrested by police outside a shop in Minneapolis, Minesota in the USA.

A footage released from the scene where he died showed a police officer identified as Derek Chauvin kneeling on the Floyd‚Äôs neck while he was pinned on the ground.

Floyd could be heard wailing for help saying he couldn‚Äôt breathe.

His death has sparked mass protests in various States in the US for five days now. 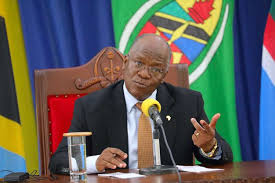