A Zimbabwean woman was allegedly killed on Tuesday by her boyfriend after she was caught red-handed with romantic text messages from her other lover.

According to H-Metro, Chipo Vhunga was assaulted by her live-in boyfriend, only identified as Munyaradzi, after he intercepted text messages from her alleged United Kingdom-based lover.

Vhunga died shortly after the assault although her body had no signs of injuries or bleeding. The fracas happened Crowborough where the two stayed together. The alleged killer is reportedly on the run.

A few hours before her death, Vhunga had shared lighter moments with her neighbour only identified as Mai Manyani.

āShe came to my house and we shared jokes before I left to pray at the field and when I returned, she beeped me on my phone and I didnāt return the call only to be informed that my child Chipo was being beaten by her boyfriend, I didnāt take it seriously and only went there after I heard that she was dead.
āItās so sad and unbearable to be killed by a person she was looking after as he had moved in with her before they were married,ā she said.

The former coupleās other neighbour Melissa said when Vhunga died, there was no sign of injury or blood at all that they all thought she was just unconscious.

āAfter killing her, he left for the first time then returned to check if she had regained consciousness because he wasnāt sure whether she had died or not, when he returned, he was in the company of his friend and together, they rubbed ābuteā on her forehead in a bid to resuscitate her but it was all in vain because she had already died,ā she said 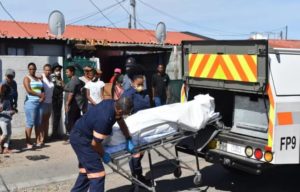