Seodi White demoted, deployed to Neno to work as DC

Human Right activist Seodi White who once served as Chief Director of Public Sector Reforms in the Office of the President and Cabinet, Seodi White has been deployed to Neno to work as District Commissioner.

The redeployment of White has attracted mixed reactions with many describing it as a fight back considering the fact that she attacked Dr. Saulos Chilima during the reign of former President Peter Mutharika.

It is said that White described Chilima as ‘Mr. know it all’. 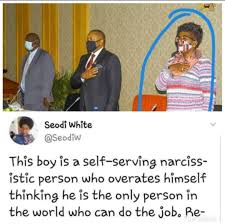 Police in Dedza district are keeping in custody a...
FaceofMalawiNEWS