An entomologist from the University of Melbourne lets thousands of mosquitoes bite his arm regularly in order to keep them fed for research on eradicating Dengue fever.

Dr Perran Stott-Ross has been involved in mosquito research at the University of Melbourne for many years now, trying to find effective ways of curbing the spread of the Dengue virus, passes between humans via mosquitoes.

One of the most promising strategies has been infecting swarms of mosquitoes with Wolbachia, a bacteria that naturally blocks the transmission of dengue fever and is passed on over generations of mosquitoes. But in order to further this research, Dr. Stott-Ross has to monitor thousands of blood-sucking bugs, and as part of that monitoring he offers his own arm as an all-you-can-eat buffet… 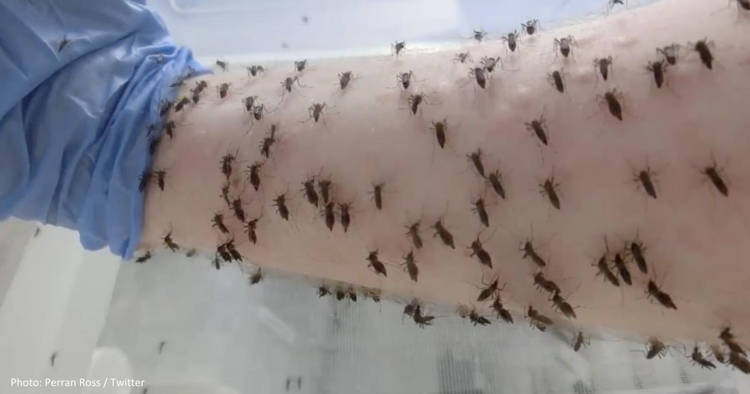 The Australian scientists first drew attention back in March, when he tweeted a photo of his blister-covered arm after reportedly feeding a record 5,000 female mosquitoes. He admits that the bites can be painful sometimes, and that he always has to abstain from scratching after blood-feeding sessions.

Are you allowed to share a photo of the enclosure? I'm curious how you take an entire arm out while making sure no mosquito escapes after feeding.

“Sometimes it can sting a little bit if they get you in the right spot, but mostly it’s just slight irritation,” Ross told Science Alert. “It’s absolutely itchy later. As soon as I take my arm out, I have to resist the urge to scratch.”

“Record day of mosquito blood feeding today. ~5000 female mosquitoes fed and 16 mL of blood lost,” the scientist captioned one of his most shared photo.