Every year, at the end of October, tens of thousands of people flock to a Buddhist temple in China to see a majestic gingko biloba tree shed its foliage and turn the temple compound from green to gold.

The Gu Guanyin Buddhist temple in the Zhongnan Mountains of China’s Shaanxi Province is home to a 1,400-year-old gingko biloba tree that some say was planted for the Tang dynasty (618–907) emperor Li Shimin, one of the greatest rulers in Chinese history.

It towers majestically over the temple, and for a few days every autumn, it rains down a gold carpet of leaves that stands out against the muted tones of the season. Because of its striking appearance, it has been called the world’s most beautiful gingko biloba tree, and has become a tourist attraction in it own right. 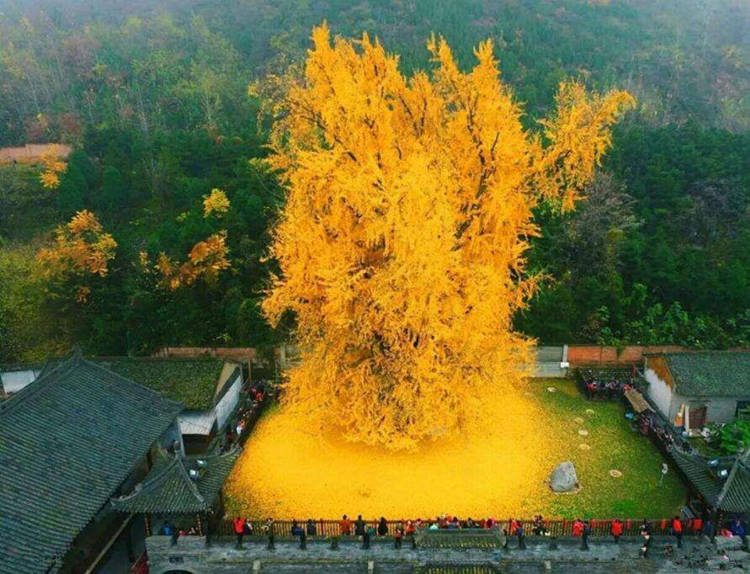 Visiting the ancient gingko biloba tree of Gu Guanyin temple has always been a key part of traditional autumn celebrations for the locals, but ever since photos of the stunningly beautiful tree went viral on Chinese social media a few years back, they’ve had to compete with tourists from all over the country, as well as foreigners, for the chance to admire it firsthand.

Back in 2017, Chinese media reported that an estimated 60,000 people came to visit the golden tree of Gu Guanyin Buddhist temple over a period of 20 days, from the end of October, through early December. During this period, the temple lets in around 3,000 visitors a day, and demand is so high that in order to guarantee entry, people are advised to make online reservations. The elderly may be allowed in, but all other visitors should make reservations in order to be allowed in. Even so, tourists queue for three to four hours to get in.

Due to the increasing popularity of its ancient gingko biloba tree, the Gu Guanyin temple has reportedly increased daily visitor capacity to around 7,200, between 8 in the morning until 5 in the afternoon.

Ever since the tree went viral online back in 2016, the 1,400-year-old gingko biloba and its “sea of gold” have become the protagonists of some of the most iconic images doing the rounds on social media.