An indigenous group in South Africa has condemned a decision to go ahead with a multimillion-dollar development in Cape Town which will include the African headquarters of the online giant, Amazon.

The Khoi community says the site – known as the River Club – is on sacred land.

They are thought to have first inhabited the area about 2,000 years ago and want it recognized as a world heritage location.

It’s where Europeans first landed in Africa and where battles were fought against Portuguese and Dutch settlers in the 16th and 17th Centuries.

The Cape Town authorities say the project will create thousands of jobs and provide a boost for the struggling economy. 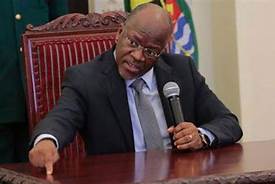 The man who declared victory over coronavirus