Prince Louis became the first member of the royal family in history to lose his privileged place in the line of succession, after a landmark decision by the Queen to change the rules.

However, the three-year-old is still above his uncle, Prince Harry, who is 36, in the line to the throne. 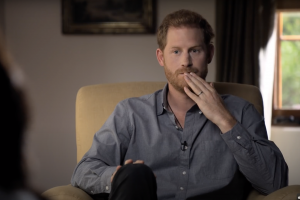 In the past, the traditional royal rule – which is called male preference primogeniture – favored male children as heirs to the throne, even if they had an older sister.

This is why Princess Anne is further from being Queen than her younger brothers, Prince Michael, and the scandal-prone Prince Andrew, are from becoming King.

But a decision by the Queen made in 2013 meant that this traditional rule, which some might consider sexist, was scrapped.

Now age comes before sex – a change that was hailed at the time as fairer for female royals and more in line with a modern opinion about the roles of men and women in society.

When Prince Louis, the third child and youngest son of the Duke and Duchess of Cambridge, was born in April 2018, he became the first royal to be affected by this change

It puts the three-year-old fifth in line to the throne, below his older sister Charlotte, who is six.

However, the line of succession still throws up some surprising results.

All three of William and Kate’s children, George, 7, Charlotte, and Louis, are ahead of Prince Harry, the Queen’s grandson and son of the heir to the throne.