The body of Kenya’s third President Mwai Kibaki is laying in-state at Parliament Buildings in Nairobi. 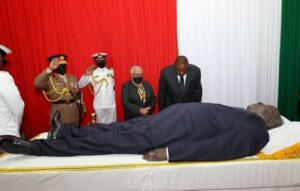 It will lie there from today to Wednesday, April 27, 2022 for Kenyans to pay their last respects.

The body of a Tanzanian national who was killed...

Payerepayere demonstrators have submitted their seven petitions to Mulanje...

The Blantyre City Council (BCC) said is set to...
FaceofMalawiNEWS